After starting the year on a trial contract, big rookie prop Jamayne Taunoa-Brown has today had his Vodafone Warriors contract further extended to the end of the 2022 NRL season.

The 23-year-old was signed on a full-time contract just before the 2020 campaign began following an outstanding preseason which culminated in him making his NRL debut against the Newcastle Knights on March 14.

Since then he has gone on to play in each of the Vodafone Warriors’ first eight matches of the year and is set to make his ninth consecutive appearance – and his sixth start – in the club’s ninth-round encounter with Gold Coast at Cbus Super Stadium on Saturday.

“Jamayne has been a great success story, coming from a train and trial contract to our top 30 and now extending until the end of 2022,” said Vodafone Warriors recruitment manager Peter O’Sullivan.

Jamayne has been a great success story

“He’s worked so hard to progress from playing for Brisbane Norths in the Queensland Cup last year to an NRL regular in our game day 17.

“Jamayne has the potential to keep growing as a player and with more confidence and time will develop his attacking game to showcase his full skill level.”

Melbourne-born Taunoa-Brown said he is revelling in the opportunity to play in the NRL.

“I'm trying to make the most of my time in first grade and play as many games as I can,” he said.

“I'm enjoying playing footy at this level and with the group of players we have. The pace of the game has been quite quick, especially with the new rule changes, but as I’ve got a few games under my belt I feel like I’m getting used to it.”

Across his eight appearances, Taunoa-Brown has averaged almost 40 minutes a game, carrying the ball an average of 109 metres and making 28 tackles a game. He scored his first NRL try in the 18-0 win over St George Illawarra on May 30.

He was the players’ player of the day in the 37-26 win over the Cowboys when he carried the ball 178 metres from 15 runs including 72 post-contact metres and made 24 tackles with no misses.

The 1.94m, 114kg Taunoa-Brown has had an unforgettable debut year, not least due to the extraordinary circumstances he experienced in the wake of the Covid-19 pandemic.

Apart from breaking into the NRL, his season has been highlighted by representing the Vodafone Warriors at the Perth NRL Nines on February 14-15  before he flew directly to the Gold Coast to join the Australian Indigenous All-Stars for the encounter with the Māori Kiwis (he is eligible for both sides).

Taunoa-Brown’s rugby league journey took him through the Melbourne Storm, the Newcastle Knights and Norths Devils in Brisbane before earning an NRL contract.

Off the field, the big man has earned a reputation as an up and coming rapper and hip hop producer known as Yung Maynie. 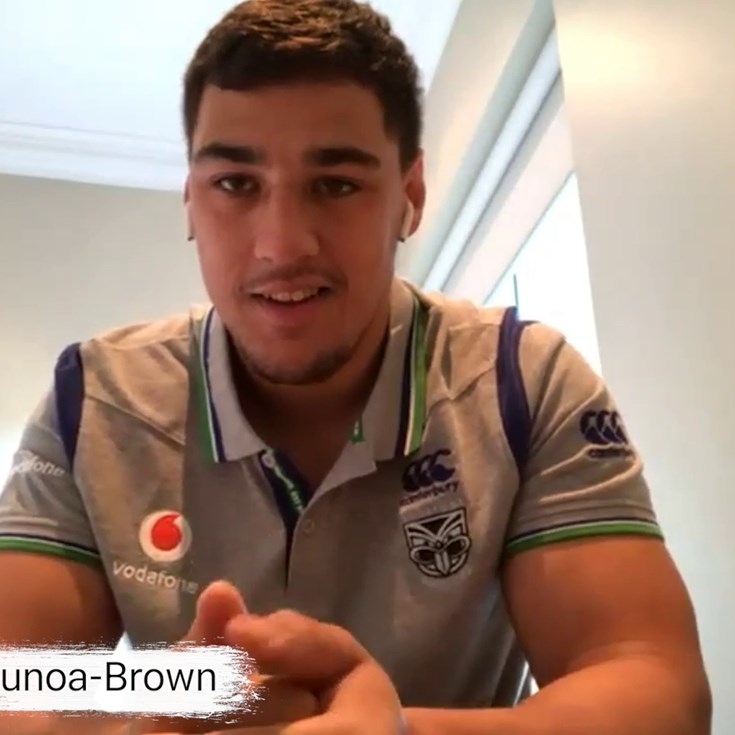 JTB: It's been really special