Warriors recruit Reece Walsh wants to discover his Maori heritage when he moves to New Zealand with his new Warriors teammates.

But the Gold Coast-raised fullback has played down the prospect of taking over from Roger Tuivasa-Sheck at Test as well as club level.

Walsh, who has never been to New Zealand and does not yet have a passport, grew up with his father Rodney and step-mother Jodie, and the 18-year-old made it clear that he considers her his "real mum".

However, his birth mother Kahuti Campbell is from Hastings in the lower North Island and while he hasn’t maintained regular contact with her Walsh hopes to meet New Zealand family members when the Warriors return to Auckland in July.

"I can’t wait to go over there and see a new part of the world and hopefully meet some family from my [mother’s] side," Walsh said.

"I don’t know too much about it but that’s a part that I am excited to look into and I have got other people around me who can help me find more about my mum’s side in Hastings."

The 2019 Australian Schoolboys representative moved a step closer to his NRL debut after being named on an extended bench for Sunday’s Anzac Day match against Melbourne, just eight days after leaving the Broncos.

Walsh said the opportunity to learn from Tuivasa-Sheck had a greater influence on his decision to join the Warriors than his Kiwi bloodlines.

With Tuivasa-Sheck switching codes next season in a bid to represent the All Blacks at the 2023 Rugby World Cup, Walsh was targeted by Warriors recruitment manager Peter O’Sullivan as his long-term replacement.

Round 7 - Johnson and Verrills return, Hunt in 21

Kiwis coach Michael Maguire also needs to cover for the loss of Tuivasa-Sheck and with Kalyn Ponga choosing Australia, Walsh would come under consideration if available, along with Charnze Nicoll-Klokstad and Dallin Watene-Zelezniak.

However, Walsh, who also has Indigenous heritage through his father, indicated he wouldn’t feel comfortable declaring his allegiances to New Zealand at this stage.

"I love that part of me but I feel a bit of a plastic [Kiwi] because I don’t know too much of that side," Walsh said. "I haven’t spoken to my mum in a long time so I probably look at myself as an Aussie."

After meeting Tuivasa-Sheck and Tohu Harris in Gosford last month, Walsh was convinced that a move from Brisbane to the Warriors would benefit his career and he was able to gain an early release from the Broncos.

His goal is to debut for the Warriors this season and while he equally at home in the halves he views fullback as his long-term position.

Magic Round: One month to go

"I sat down with Tohu and Roger and I fired some questions at them," Walsh said.

"They answered honestly and I wanted to get here as soon as possible so that I could take in the knowledge and see what he [Tuivasa-Sheck] does on and off the field.

"That played a major part in me signing with the club and also wanting to get over here a year early to learn off him.

"I know everyone is going to have big expectations on me but I am just going to go out there and play my footy and do what I know.

"Everyone’s going to expect that I’m filling Roger’s shoes but I’m not Roger - I’m a different player to Roger. I know that if I go out there and do what I can do, that will handle itself." 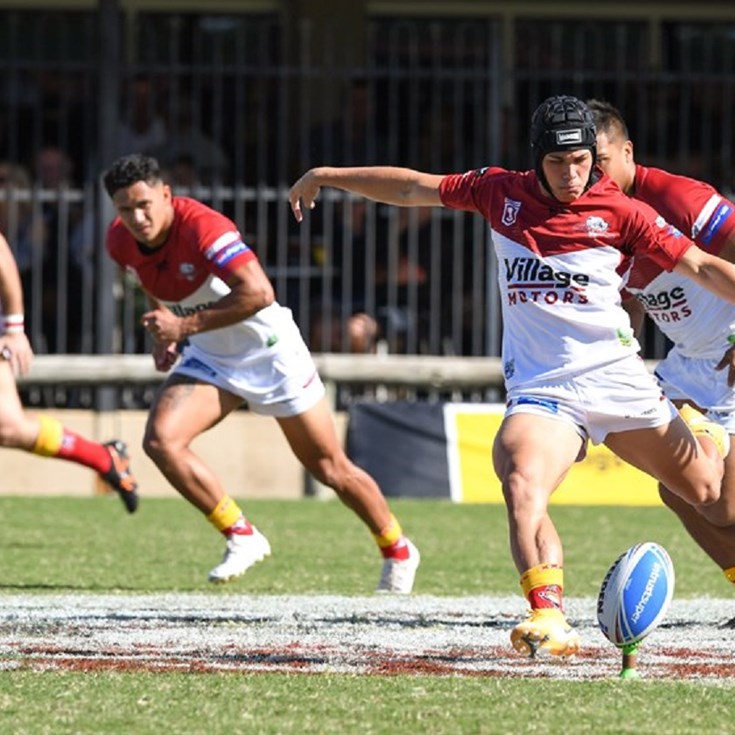 Walsh and Katoa score in Dolphins' close loss to Seagulls

Papenhuyzen out of Storm side for Anzac clash