An indelible link between Manly and Brookvale Oval with two landmark events in Stacey Jones’ extraordinary career feature in this week’s edition of Throwback Thursday (presented by Mazda).

On each occasion the Vodafone Warriors fashioned dramatic comebacks to win by two points, success orchestrated by the legendary Jones both times.

The first on August 27, 2005, was Jones’ 238th and final appearance for the club before he took up a contract with Les Catalans in France to play in the Super League. It drew the curtain on a remarkable NRL career.

Or so everyone thought at the time …

Leap forward to March 22, 2009, and it was welcome back time for the Little General. There was Jones almost incredibly decked out in his beloved club’s colours again making one of the game’s greatest comebacks. Not only that but back at the same venue facing the same club when he had signed off in ’05.

Going into their last outing of the 2005 season, the Vodafone Warriors were out of contention for the finals. They had lost their last four matches on end, going down 4-16 to Newcastle the previous week in Jones’ last outing in front of the Ericsson Stadium faithful (a night when he was denied three tries).

So, the motivation was centred on giving Jones the winning send-off he deserved that night at Brookvale.

He turned on a masterclass playing a key hand in each of the first three tries to give his side an 18-10 lead at the break before Manly came back to hold a 20-18 advantage.

With four minutes left, Jones did it all himself.

The Sea Eagles turned the ball over and he immediately struck, cutting through from close range – leaving Manly’s Steve Menzies grasping at air – for the match winner. At the full-time siren all the attention and accolades fell on the champion halfback, hugs all round from his teammates and tributes from the commentators.

In late 2008 came the dramatic announcement that Stacey Jones was making his NRL comeback after retiring following his two-year stint in France.

He didn’t appear in the Vodafone Warriors’ opening round win over Parramatta in 2009 but was brought into the squad for the second-round trip to Brookvale, named on the interchange bench for just the second time in his career.

His comeback added a thrilling dimension to what became a stunning contest, Brookvale basking on a hot Sunday afternoon with 16,000-plus fans packed in.

Anticipation lifted as Jones waited on the side-line holding the #3 interchange card waiting to run on. And then he was crossing the touchline for his 239th appearance, the knowledgeable if partisan crowd abuzz.

What followed was the stuff of sporting fairy tales.

The Vodafone Warriors had been 16-10 ahead at halftime but then went backwards as the Sea Eagles roared into a 24-16 lead with three unanswered tries.

Cometh the man of the moment.

From well inside his own half Jones ran at the line, chipped delightfully, raced through to regather, dummied inside to fullback Wade McKinnon and then swerved out to the right on an arcing run. He may well have scored himself but he fed Brent Tate instead for the centre’s second try. Denan Kemp missed the conversion from a handy enough angle leaving the Vodafone Warriors 20-24 behind.

Into the final moments and it was Jones the provider again, floating a teasing bomb left where Manu Vatuvei rose to bat the ball inside, Jerome Ropati seizing on the opportunity to lock the score up at 24-24. The heat was on Kemp from wide out, he obliged with a superb conversion and the Vodafone Warriors had snared a remarkable victory on a remarkable day.

The post-match narrative was all about the Jones boy. No surprise there for he had written not one but two special chapters in his career against the same team, at the same ground three and half years apart.

It had been farewell Stacey in 2005 now it was hello again, it’s great to have you back. 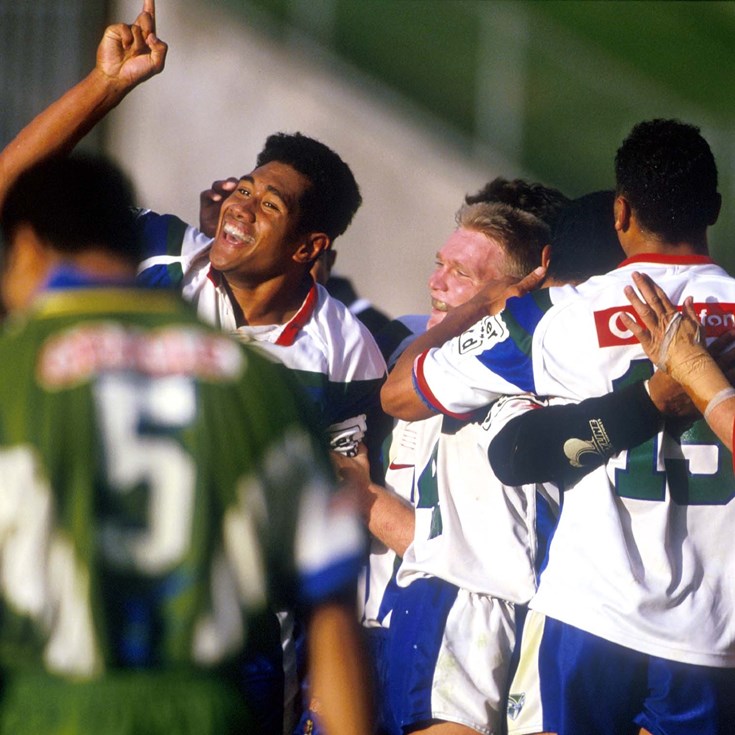