Down by 12 points with just eight minutes to go, the Vodafone Warriors fired up for a stunning – and controversial – 32-30 victory over Canberra 21 years ago in this week’s instalment of Throwback Thursday.

The omens leading into this 1999 encounter at Ericsson Stadium weren’t at all encouraging.

After starting with two wins from the first three rounds, the Mark Graham-coached side had slumped to six straight losses including three heavy defeats by Melbourne (10-38), North Queensland (0-24) and Parramatta (6-28).

And so it was that the Raiders seemed to have control for most of the contest, leading 24-12 midway through the second half and then 30-18 after 72 minutes.

Just when there didn’t seem a way back, Raiders back rower David Furner lost possession 10 metres inside his own half, winger Odell Manuel latched onto the loose ball and dashed 40 metres to score.

With less than six minutes to go, the home side surged back onto attack, off loads and switches of direction stretching the Raiders until young Ali Lauitiiti cut them to shreds coming back against the grain to score between the posts. Matthew Ridge converted and, quite incredibly, it was 30-30.

Now came the drama and controversy. Two minutes showing on the clock, Nigel Vagana running from dummy half to within five metres of Canberra’s line in front of the posts, the field goal play on.

Instead the ball came loose as Vagana got up to play after being tackled by Raiders interchange forward Nathan Sologinkin. Referee Matt Hewitt didn’t hesitate, penalising Sologinkin for interference and the crowd went wild. Raiders captain Laurie Daley clearly wasn’t impressed but the Vodafone Warriors and their faithful couldn’t have cared as Ridge knocked over the easy penalty for a breath-taking two-point victory.

The win had a costly aftermath, though, with Ridge – who kicked six from six – subsequently suspended for eight games after he was charged with an eye gouging incident involving Canberra winger Lesley Vainikolo. 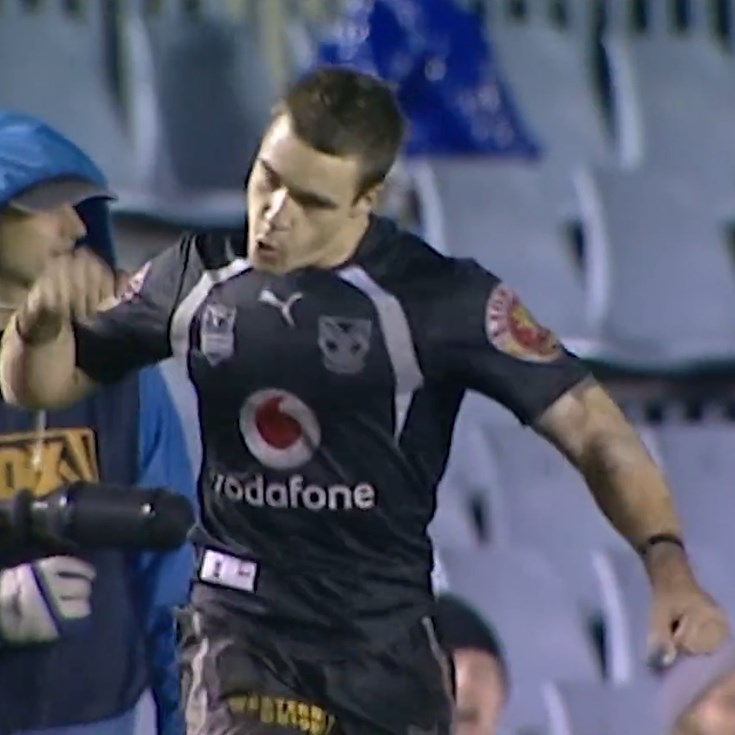