Inspirational Vodafone Warriors captain Roger Tuivasa-Sheck is now in line for another of the game’s greatest honours after being nominated by the club for the prestigious Ken Stephen Medal.

And Vodafone Warriors fans can vote here to help Tuivasa-Sheck become a finalist.

The highest-polling player in the public vote joins three other Ken Stephen Medal finalists decided by an expert judging panel with the winner announced at the 2020 grand final.

The award recognises the efforts of an NRL player who has not only achieved on the field but has also been outstanding with his impact in the community.

The much-decorated Tuivasa-Sheck has been honoured with the game’s two premier awards in the last two years after winning the Dally M Medal as the NRL’s 2018 player of the year followed by the 2019 Golden Boot as the world’s best player.

In nominating Tuivasa-Sheck, the Vodafone Warriors highlighted the community-wide influence he has had on people’s lives as a face of the game this year as well as his deeds in supporting community events, initiatives and causes.

“We would contend he has contributed in a unique manner in this unique season so dramatically and adversely affected by the Covid-19 pandemic,” the club said.

“Indeed, he hasn’t stopped making a difference in an all-encompassing manner throughout this most extraordinary season, not to mention taking the meaning of being a role model to a new level.

“His contribution transcends the more familiar forms of giving time willingly in the community. As Vodafone Warriors captain and a fullback par excellence, his deeds on and off the field have always captured the essence of what an NRL player should exemplify to the rugby league community. He absolutely embodies what is good about the game but this year, in adversity, his personal qualities have shone through like a beacon as he has galvanised those around him and, even more significantly, society at large.

“It should never be forgotten that he and his partner made a mutual decision that he would travel to Australia and remain there for the whole season on his own while his young family stayed home in Auckland. He was all in, committed to his club, to his teammates and staff, to rugby league, to the NRL, to sport per se and to New Zealand to do all he could despite the enormous sacrifice he had made.

“It hasn’t been easy. During the campaign he said he thought about being home with his family every day and was emotionally stretched throughout, not least when he missed milestones; he had to watch on his mobile to see his infant son crawling for the first time and he couldn’t be home for his daughter’s birthday.

“Through it all, Roger found a way to train and perform at the highest level, to be the on-field and off-field leader his team needed, to treat teammates, staff, opponents, match officials and all people he met with the utmost respect.

“Aside from the above, he was a major contributor to the club’s community programme and also gave his own time in more conventional ways off the field.”

One memorable example occurred when he combined with Ola, one of the club’s new sponsors, on a junior rugby league support initiative at the Otahuhu Leopards (Tuivasa-Sheck’s junior club).

He took the lead in a special way by turning up at one of the player’s homes to meet a stunned young Rocco and drive him to training. The pair instantly struck up a bond on the trip to Mount Richmond Domain in suburban Auckland where Rocco and his teammates trained.

Tuivasa-Sheck had brought along some of his Vodafone Warriors team as he led the youngsters with their warm-up, skills and drills and then conducting a couple of conditioning blocks to test the team out. The session finished with Tuivasa-Sheck and his teammates passing on some well-earned giveaways as well as sharing their experiences at both the highest level and back when they were in the same shoes of the young players.

Soon after the team arrived in Australia for the resumption of the NRL season May, Tuivasa-Sheck again connected with junior rugby league players through a personal approach by the Erina Eagles (Central Coast, NSW). The club reached out about the chances of him linking up with the club’s under-14 players. He responded by jumping online to chat to the team about his journey and what he has achieved so far as well as answering questions.

Among other activities during the past 12 months, Tuivasa-Sheck has also worked closely with Ronald McDonald House, visited schools, interacted with kids at Sky Sport Rugby League Roadshows, been a face of Men’s Health Week, supported Cultural Choice: Boots for a Bright Future and spent time delivering Christmas presents to patients at Starship Children’s Hospital in Auckland.

Club legend Ruben Wiki was the first (in 2007) and remains the only Vodafone Warriors player to be awarded the Ken Stephen Medal. 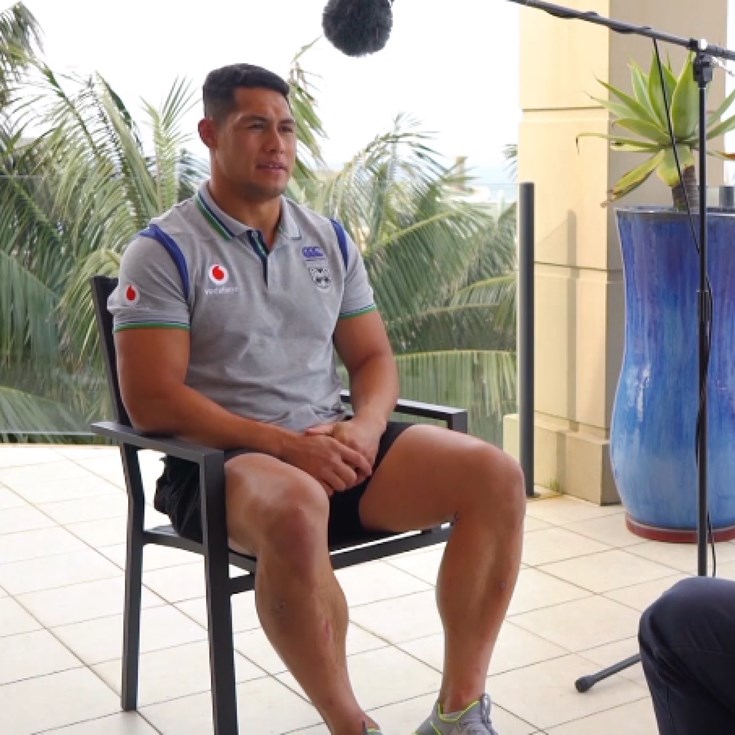