Two locks, a half, a centre and a fullback make up the five finalists for the NRLW Players' Champion award to be announced at the RLPA's end-of-season dinner.

Georgia Hale (Warriors), Charntay Poko (Warriors), Rona Peters (Broncos), Jess Sergis (Dragons) and Botille Vette-Welsh (Dragons) were voted into the top five by their peers on a 3-2-1 basis after the conclusion of the regular season. It's the same system that's used for the men's Players' Champion award.

The first captain of the NSW state women's team and a former Jillaroos captain, Tarsha Gale, will present the award on Monday night in Sydney.

Previously, the RLPA recognised its female membership at the event through an Elite Female Player of the Year award. But this was mainly based on representative fixtures, which mostly fall outside the regular club competition.

It has been changed to a NRLW Players' Champion award and Gale said the standard of season two of the NRLW in 2019 demanded the overall honour.

"The players all adopted the mantra of fitter, faster, stronger as all four teams looked exactly that," Gale said of the Broncos, Warriors, Roosters and Dragons who make up the NRLW competition at present.

"Their quicker play-the-balls, execution of set plays, the hit-ups ... everything was better and more intense.

"Each week the girls improved and that's not just based on individual talent but the fact they were gelling with their teammates," Gale said.

"So if they do extend the competition to 35-minute halves, or perhaps add a couple more rounds, then that will give the girls longer time to play together and produce an even higher quality of football, which we all know they're capable of.

"They don't need to add a team just yet to do that."

As for the five finalists nominated (in alphabetical order below), Gale reserved praise for each.

"She's incredible and one of those captains who really leads by example on the field. She led the tackle count in most games.

"Her preferred position I think is in the halves but she took on the lock position. She's like the Swiss army knife of NRLW. She can be your leader, your lock, your playmaker, your inspiration.

"In other words, Georgia can get into any position and fix it.

"And what she does off the field with her work with intellectually and physically-disabled players, and getting them on the field, has been outstanding. She's the whole package."

"She's amazing. She makes an average [of] eight hit-ups a game and scored two tries in four games.

"Anywhere close to the line and you look for her. She's the battering ram - just keeps getting up and going again. She's been invaluable like that for the Broncos.

"I picked her for the tackle of the round [Broncos v Warriors, round three] and it was against her little sister Hilda Mariu [nee Peters]. It just shows that club is thicker than blood on the field.

"Rona is wonderful how she leads the Broncos forwards around."

"She was absolutely fabulous. Injury problems prevented her from playing last year but she made her presence felt this year.

"She was probably [coach] Luisa Avaiki's secret weapon this year, but I don't think Charntay knew herself how good she is in the way she controls games.

"Her boot is incredible with her 40-30s and forced dropouts [four]. After the round one performance against the Roosters everyone was going 'Who the hell was that?'

"She's already been named the Dally M and Dragons women's player of the year to give you some idea of her quality.

"Jess is always competitive. She goes into every hit-up or tackle as if it's her last on a rugby league field.

"Her strip on one of the best players in the game in Isabelle Kelly in the round three win over the Roosters was another measure of her competitiveness."

"Botille made 16 tackle-breaks in her four matches and ran an average 135 metres per game.

"She's one who went from each round better and better. She is only a slight-build but boy she can get through some tackles.

"She's dangerous with the ball in hand like all good fullbacks."

Under the rules, every NRLW player is eligible to vote and be nominated for if they feature in at least one match for their club. A player cannot vote for another player at the same club. 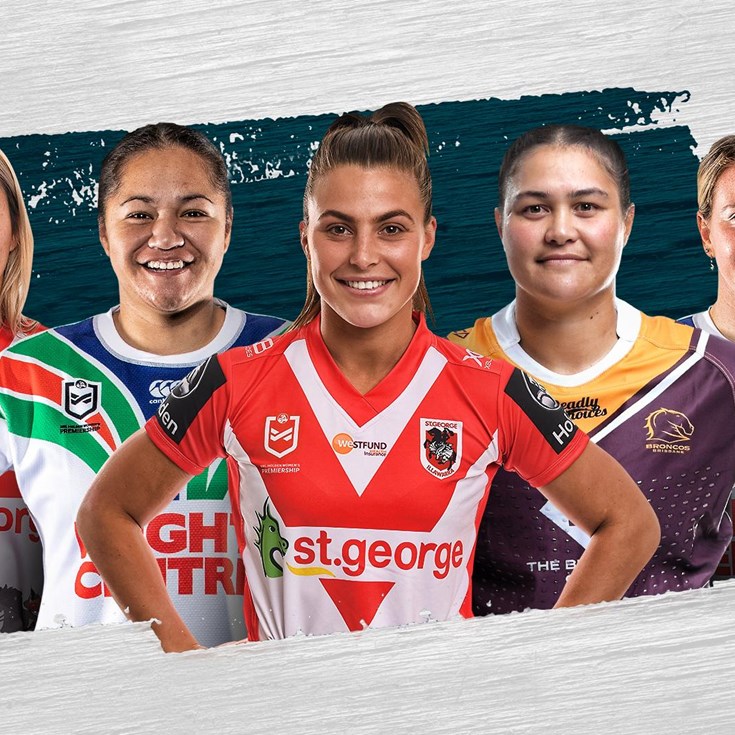 I love the game's physicality: Hale