For Nathan Brown, it was a snapshot of the season as "horrible" second-half game management led the Warriors to yet another tight loss against the Raiders.

After mounting a surprise 16-0 lead inside 25 minutes, the New Zealand team sloppily allowed Canberra back into the contest and the scores were level with 15 minutes remaining.

The Warriors were left to rue their execution with fullback Reece Walsh missing the team's lone long-range field goal attempt.

Jordan Rapana and Hudson Young crossed in the dying stages to give the Raiders the crucial 28-16 win at Mackay's BB Print Stadium.

Berry in this right place at the right time

"The way we managed the second half - we didn't do very well," Brown said.

"Our kicking game fell apart. If we did get a kick away, we gave away a penalty.

"So Canberra had all the ascendancy and then, as has been the case this year, with three or four minutes to go the scores were level and we have a shot at field goal - and we never seem to be able to get it.

"It doesn't matter who has a shot or from where. It probably wasn’t the right play because we were 40 [metres] out.

"An experienced team probably would’ve just put the ball high into the corner and tried to defend the next set.

It's been a frustrating maiden year at the helm for Brown, with the Warriors losing seven matches by six points or fewer.

"We've had a lot of goes at close games this year. I think that was our fifth shot at a field goal with a few minutes to go and the scores were level and it would’ve put us up, but we've missed," he said.

"It's something we’ve certainly worked hard at but we're certainly not quite getting it right … The way we managed the second half was horrible from our point of view.

"Last tackle when we finally got back down there, our dummy-half threw it to a front-rower on the last tackle.

"There are a million things we could have done a little bit better to give ourselves a better chance."

We have a try inside a minute!

Townsend will have scans on Saturday but the Cowboys-bound No.7 has almost certainly played his final match for the Warriors

Brown said the mid-season recruit set an example for the club's younger playmakers in the way of organising a match.

"There’s been a lot of noise about Chad coming to us from a lot of different people, but I think we saw how he helped our game-management in that first 40 minutes," Brown said.

"Unfortunately, when he did come to us [in round 16 against the Dragons], he got a very bad injury in the first minute and then tonight again he hurt his shoulder again and had to come off.

"We're obviously quite hopeful that Shaun Johnson’s experience and kicking game will certainly help our younger players in some tight situations [in 2022]. That's what the plan is.

"And from the amount of times we’ve been in close games this year, hopefully there are some good lessons for us in the pre-season and we get some good growth." 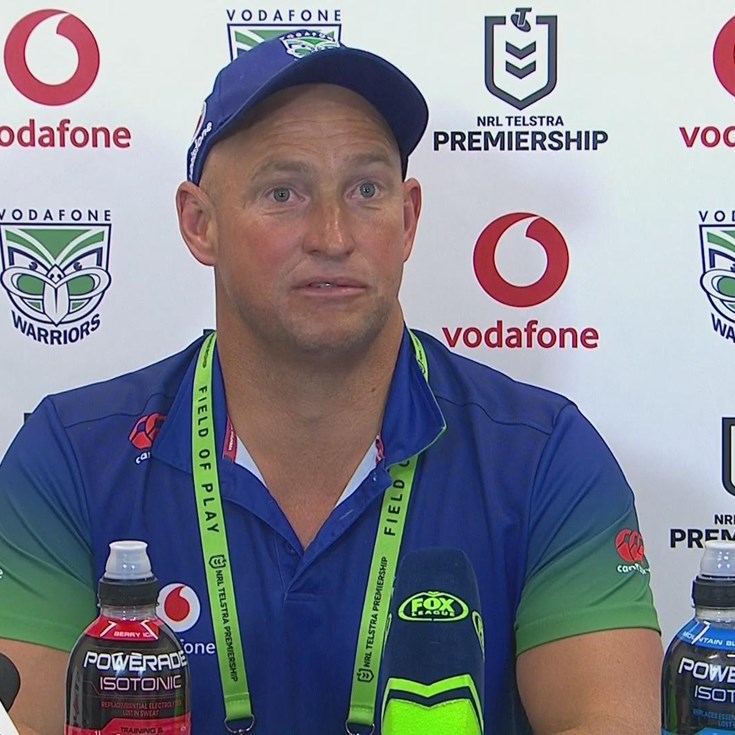 Brown: Bit of work to do in key parts of game

Another kick, another spill and DWZ has Warriors' third try