The battle for NRL rookie of the year honours looks to have come down to Reece Walsh and Sam Walker - two stars of the future who have lit up the game in 2021.

The Roosters No.7 and the Warriors No.1 have showcased a dazzling array of skills and served notice that long and prosperous careers await them in the NRL.

Higher honours undoubtedly await both youngsters in years to come but as we draw to the end of their debut season, the debate hots up as to which whizz-kid will join an honour roll that includes Greg Alexander, Steve Menzies, Braith Anasta, Daly Cherry-Evans and last year's winner Payne Haas.

For & Against - Walker edges Walsh for rookie of the year

Reece Walsh has enjoyed an impressive rookie season but has faced nothing like the flamethrower of attention and scrutiny that Sam Walker has been subjected to.

From the moment Walker made his debut in round four against the Warriors the expectations have grown.

Is it too soon for him to start playing? Will the Roosters stick by him when the business end of the season comes around? How will someone of such a small physical stature handle being in the defensive line week after week?

Walker has been scrutinised from just about every angle and pretty much every question has been answered affirmatively.

He just looks like a first grader and the scary thing is he has only scratched the surface with regards to his potential.

Walsh has enjoyed some brilliant performances for the Warriors, but the scrutiny that comes with playing for the Roosters has avoided him.

How Keary is helping Walker on and off the field

Walsh’s many high points have been rightly praised, but his off days have been quickly forgotten.

That luxury has not been afforded to Walker. Any problems he has faced have been sliced and diced by commentators.

Roosters coach Trent Robinson is using Walker as a key figure in his plans to change the way the Roosters play.

Those looping passes to wingers are already a trademark of the young Queenslander. His penchant for running backward at the end of the game also is, but those passes are of far more importance right now. The joie de vivre he plays with is also refreshing.

It’s safe to assume that Walker will get a lot stronger as the years roll by. His sound defensive technique will then have added strength incorporated into it.

Provided Walsh or Walker win the rookie of the year gong, it will be hard to mount a major objection about either young man. But considering the pressure Walker has been under while making such a strong start to his NRL career, he probably deserves to have his nose just in front at this stage.

This pair both appear set for impressive careers for both their club teams and eventually the Maroons.

Them teaming up for the Kangaroos some time in the future is also on the cards.

It's a fair bet Broncos fans have been covering their eyes and muttering under their breath all season long as "the one that got away" has produced a dazzling debut season.

How Reece Walsh was ever allowed to slip through the Broncos' net is a story for another day but the Warriors brains trust can rightly claim the whiz kid's signing as one of the most significant in the club's 26-year history.

At 19 and with the rugby league world at his dancing feet, Walsh is the man to build a franchise around now that inspirational skipper Roger Tuivasa-Sheck has moved on.

Apart from his silky skills, RTS brought class and composure and a great culture to the club and his legacy is in safe hands with his teenage protege Walsh.

From the moment he debuted in round seven against the Storm with two try assists and five tackle breaks, Walsh has looked at home on the big stage.

Like fellow rookie sensation Sam Walker, there's a brashness and self-belief that belies his age.

Confident without being cocky, Walsh and Walker have featured on endless highlight reels this season and proved beyond doubt that if you're good enough, you're old enough.

Walker will get a taste of September footy in his debut season as the Roosters march into their eighth finals series in the past nine years.

Walsh will have to bide his time with the Warriors set to come up just short this year but coach Nathan Brown has instilled a resilience in this team that will ensure they are in the mix in 2022.

With favourite son Shaun Johnson on his way home next season to join forces with the prodigiously talented Chanel Harris-Tavita in the halves, Wayde Egan at hooker and Walsh at fullback, the Warriors have a spine capable of matching it with the big boys.

When they finally make it back to Mt Smart Stadium and the Warriors faithful fill the joint to the brim, the atmosphere will be among the most intimidating in the competition.

Feeding off that atmosphere and bringing the fans to their feet on a regular basis will be Walsh, already boasting an impressive 13 line breaks, 44 tackle breaks, 10 try assists and nine tries in his 13-game career.

Yet another product of famed rugby league nursery Keebra Park State High, Walsh is blessed with abundant flair and just the right amount of lair to be lighting up the NRL for a decade or more, just like another Keebra graduate who won a premiership at 20 and is still strutting his stuff 16 years later at the Rabbitohs.

And just as the mercurial Marshall became an instant cult hero with his sizzling sidestep and freaky flick passes, so too the whiz kid Walsh has lit up his debut season with an array of skills reserved for a special few. 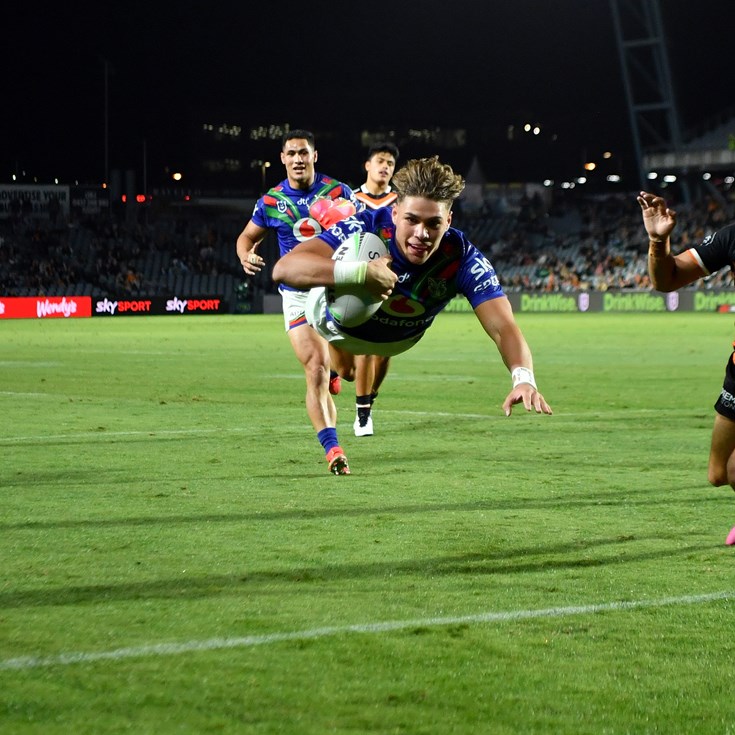 Wonder kid Walsh turns it on in Warriors' win

Walsh hunts down Harris-Tavita kick for ninth try of year

Walsh's magic pass puts Montoya over for his second