Graham Annesley launched a passionate defence of match officials because he feels they are being unjustly blamed in "rubbish" commentary from critics for deciding the outcome of games.

Fed up with "turning the [other] cheek" to fierce criticism, the NRL head of football on Monday fired back at coaches and media commentators who have blown up about "arguable at best" calls.

There was a slew of controversial incidents in round 22 but Annesley said he backed the judgement of the officials.

Annesley's response came after he reiterated his concerns about the spike in foul play with 41 such incidents penalised last round - slightly down on 43 the week prior but a marked increase on 25 in round 20.

"It's kind of overwhelming, the post-match commentary about what's happening in games," Annesley said in his weekly media briefing.

"Each one of those incidents, I would say, has a far greater impact on the outcome of the game than one or two refereeing decisions that might be arguable about whether they were right or wrong.

Get Caught Up: Round 22 must-see moments

"I understand everyone's under pressure. I understand the coaches are trying to qualify for the [top] eight and in some cases save their jobs for the future. I get that.

"That's been part of our game for a long time. But I just think it's got a little bit out of control recently.

"We'll see one incident in a game and then the whole post-match discussion is about that incident ... Frankly, it's just rubbish and it's not worthy of the people who make those comments."

Annesley believes the spike in intensity with the finals approaching may be the reason frustrations have boiled over.

While coaches are entitled to voice their opinions, he takes issues with any insinuation that a team lost due to the refereeing.

"Many of these incidents happen at different stages of games where teams have got every opportunity to go on and win the game if they're good enough," Annesley said.

"But what I've seen over recent weeks while some of these criticisms have been going on is that teams have lost games because they haven't been good enough to win them.

"Someone has to stand up for the referees as well because there are very few people willing to do that.

Every try from Round 22

"And I would be less likely to stand up and publicly defend them or say what I'm saying today if we [at the NRL] weren't also prepared to put our hands up and say when we get things wrong, which I've been doing now for three years.

"When we do that, we accept responsibility. And, frankly, it's time other people accepted responsibilities for the outcomes in some games as well."

Annesley also explained why Panthers halfback Nathan Cleary wasn't charged with a shoulder charge after a tackle on Friday in which he turned side-on to meet Dragons fullback Jack Bird.

"We have to remember what a shoulder charge is - and that's someone charging at an opposition player with their shoulder," Annesley said before showing several examples of innocuous tackles similar to Cleary's.

He also supported the Bunker's decision to award a late penalty to the Roosters after a captain's challenge because Broncos prop Tom Flegler clipped Sitili Tupouniua high, even if the contact wasn't forceful.

Adam Keighran booted a penalty goal to subsequently clinch a dramatic 21-20 victory for the Tricolours on Friday night.

There had been confusion as to why the Roosters were able to use a challenge given Egan Butcher was tackled after Tupouniua lost the ball backwards and then knocked on in the play-the-ball.

Frankly, it's just rubbish and it's not worthy of the people who make those comments.

Elsewhere, Annesley confirmed it was the right decision to overturn a try to Bulldogs winger Falakiko Manu in the second half of their loss to the Warriors.

Canterbury hooker Sione Katoa was ruled to have struck Warriors back Edward Kosi high after he made an error before Manu touched down.

"I just don't see the logic in suggesting that this isn't worthy of a penalty," Annesley said as he played slo-mo replays of the tackle.

Sharks interim coach Josh Hannay was another who expressed disgruntlement in his post-match media conference.

In particular, Hannay was upset by referee Matt Cecchin's call to crucially penalise Cronulla for driving Newcastle centre Bradman Best into his in-goal area after the tackle had been completed.

The Knights advanced downfield and kicked a penalty goal moments later, holding on to secure a hugely important 16-14 win.

Again, however, Annesley was satisfied with the outcome, playing audio that proved Cecchin had called "held" four times as three Sharks defenders carried on with tackling Best.

"If he doesn't blow a penalty there and this vision comes to light after the game and the audio and he just rules a goal-line drop-out ... [Then] we're facing a very different controversy," Annesley said. 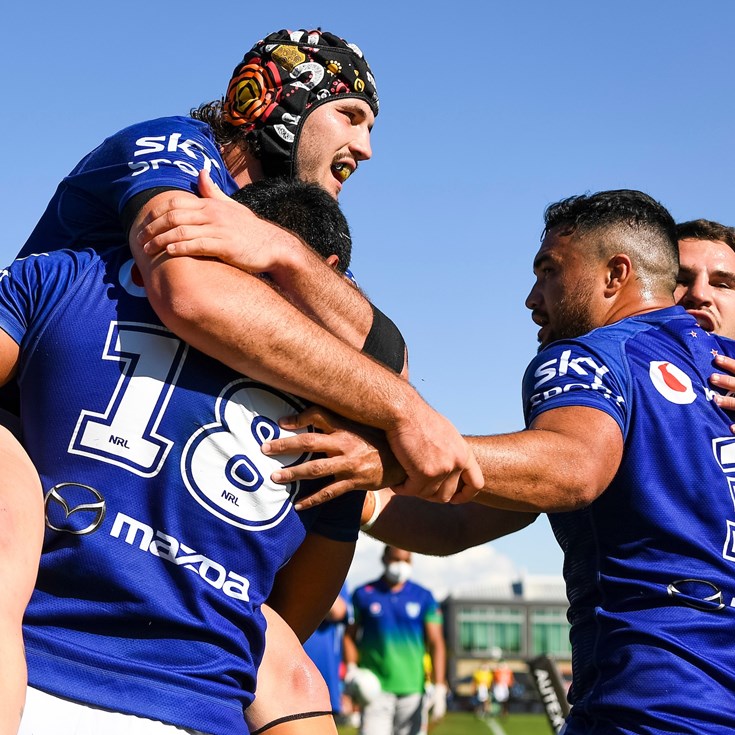 Catch up on all round 22's must-see moments

Curran makes team of the week after superb performance

Watch every try from every game in round 21