Nathan Brown hasn't heard a single Warriors player complain about being away from home and he doesn't expect them to start when they shift to south-east Queensland.

Along with 11 other teams based in NSW and the ACT, the NRL's most prolific nomads will shift from their makeshift Central Coast base and head to the Sunshine State by Wednesday.

The NRL announced the decision on Sunday night due to the COVID-19 spike in Sydney. The clubs will stay in Queensland for at least a month to keep the competition going.

After spending last year in Australia, several Warriors players who hail from New Zealand brought their family with them to the Central Coast and some of their children are enrolled in local schools.

But despite their plans being thrown into disarray, coach Brown anticipates that his squad will continue putting the game's interests first in a no-fuss manner.

Get Caught Up: Round 17 must-see moments

"They've moved from another country last year and have moved all over the shop this year a few times already so we can be in a position to train together and be together," Brown said after his team's 20-12 loss to the Sharks at Netstrata Jubilee Stadium.

"It's part of everyone's journey and I'm sure everyone would be pretty understanding from most clubs. They've been really good, the guys.

"They don't complain, all the boys from New Zealand, honestly. If they've complained, I haven't heard about it in my time [at the club]. They've been terrific.

"Having their families here this year has made the circumstances a little better and the people at the Star of the Sea [hotel in Terrigal] are great."

Sharks coach Josh Hannay learned about the decision to relocate to Queensland in his press conference and said the game has "got a responsibility to do whatever it takes".

"Over the next 48-72 hours, the family situation is going to be a real key and everyone is going to have to sit down with their families and work out what the immediate future looks like," Hannay said of his players.

"That's probably the stuff that we need to wrestle with over the coming weeks. Making sure the families are getting on with life and they're OK.

"If that was the case [that players didn't want to relocate], you could understand. There's so much uncertainty around at the moment and obviously family comes first.

"There's going to be some delicate conversations going on over the next two to three days. We'll support every player with whatever decision they make."

Brown, meanwhile, said the Warriors weren't affected by a drama in which their pre-match food had to be thrown out because a catering member at the stadium was deemed a close contact of a COVID-19 case.

Warriors just keep the play alive for Walsh to score

However, he wasn't pleased by the impact of Chris Sutton's refereeing. Brown felt "everything was a penalty" when similar incidents were let go last week.

"I haven't complained all year and we've lost lots of close games, [but] I thought the refereeing was really poor today," Brown said.

"And I feel sorry for him [Sutton] because – I mean, I'm at a loss about what the rules are now after the way last week was reffed to this week was reffed.

"I thought the way the game was reffed didn't help us build pressure as well. I'm not saying we didn't do things wrong, but I just don't understand what the rules are anymore. I'm lost.

"And the momentum swings off the back of that are huge. The swing of the momentum is big, but we still lost that game ourselves in that period [before half-time] where Cronulla managed it well and we didn't defend well enough in that little period.

"That was our fault, not anyone else's fault." 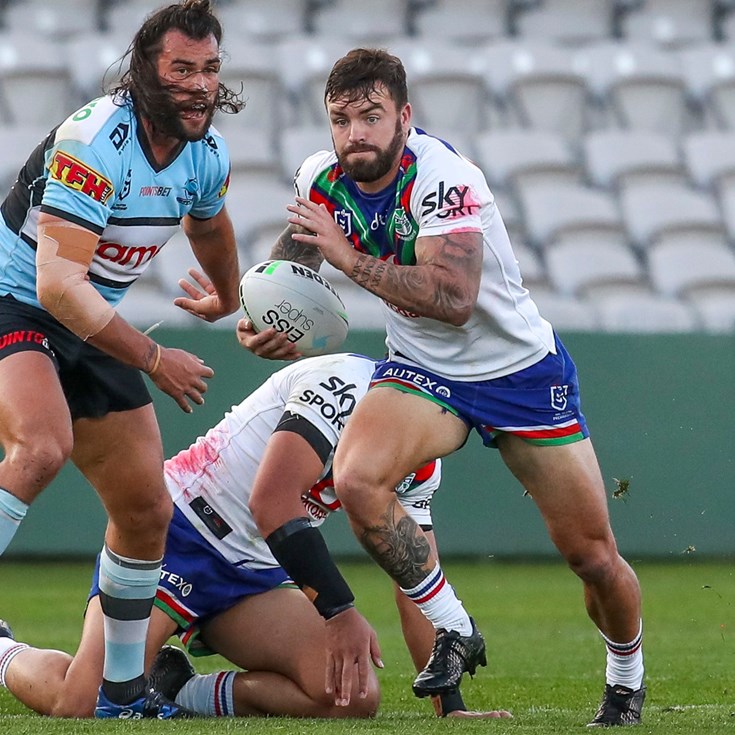