Storm coach Craig Bellamy has advised Cameron Munster to tone down his aggression after the five-eighth was again placed on report for kicking out at an opponent.

Melbourne usurped Penrith atop the premiership ladder on points differential after thumping the Warriors 42-16 on Sunday.

Brandon Smith, Harry Grant and Nicho Hynes were brilliant, but Munster is facing more scrutiny over a 33rd-minute incident in which he looked to have kicked Roger Tuivasa-Sheck as the pair wrestled following a tackle.

There didn't seem to be any great force, but it wasn't a good look for the star playmaker after he escaped with a fine for a similar act on Blues forward Liam Martin in Wednesday's Origin opener.

"I'd have to have a look at it, but it probably wasn't the smartest thing to do if that's what he's done.

The pair both scored tries with Smith starting at hooker and then switching to a running forward role when Grant came on.

"It's a nice little issue to have when they're both out there playing together. The dummy-half might be playing the ball and there's another dummy-half to work off that," Bellamy continued.

"I'm really happy with both those guys. It was a big effort from Harry. He hadn't played for five weeks [due to injury] – to play in Origin and then to back up tonight, that's a badge of honour."

Bellamy also revealed that injured fullback Ryan Papenhuyzen could return from a head knock against the Roosters in round 16.

By that point, he would have missed five weeks.

The dynamic custodian's comeback will help the Storm in their quest for an incredible fourth minor premiership in six seasons.

Not since 2015 have the Warriors beaten Melbourne and aside from an even opening period, they never posed a serious threat.

After a stirring pre-game haka from the crowd, the Warriors took the lead with Kodi Nikorima's 10th-minute penalty goal before Hynes levelled it up a few sets later.

Fresh on the field, Grant sparked a right-edge movement that resulted in Melbourne winger Dean Ieremia collecting his second NRL four-pointer in the 23rd minute.

Brandon Smith, running off Grant, then put his head down at close-range and burrowed across the line to extend the advantage.

Maumalo gets a try in his Warriors farewell

Tuivasa-Sheck pulled off an incredible tackle to hold up Ieremia and deny him a brace, but Josh Addo-Carr soon skilfully touched down from a Hynes kick to hand the visitors an 18-2 buffer at the break.

The Warriors needed to strike first to give themselves a hope in the second half, but the Storm took just five minutes to extend the gap.

Grant laid the groundwork as he collected his own grubber before the ball popped up for halfback Jahrome Hughes - who knocked back an offer from the Warriors earlier this year to remain in purple long-term – to score.

Justin Olam (56th minute), Grant (66th) and Tom Eisenhuth (72nd) also crossed for the Storm, while Ken Maumalo bagged a late hat-trick in his 106th and final game for the Warriors.

Grant sells the dummy and dives over

The hulking winger, who will officially join Wests Tigers this week, dotted down in the 60th, 76th and 79th minutes to provide some solace for the hosts after a tough afternoon.

Addo-Carr, meanwhile, is now the season's top try-scorer with 16.

"It is my job to score tries, but if my teammate is in a better position than me then I'm going to let him score a try," Addo-Carr said.

"I don't really worry about that stuff too much. I just try to do my job for the team each week. If I come the top tryscorer, it is what it is." 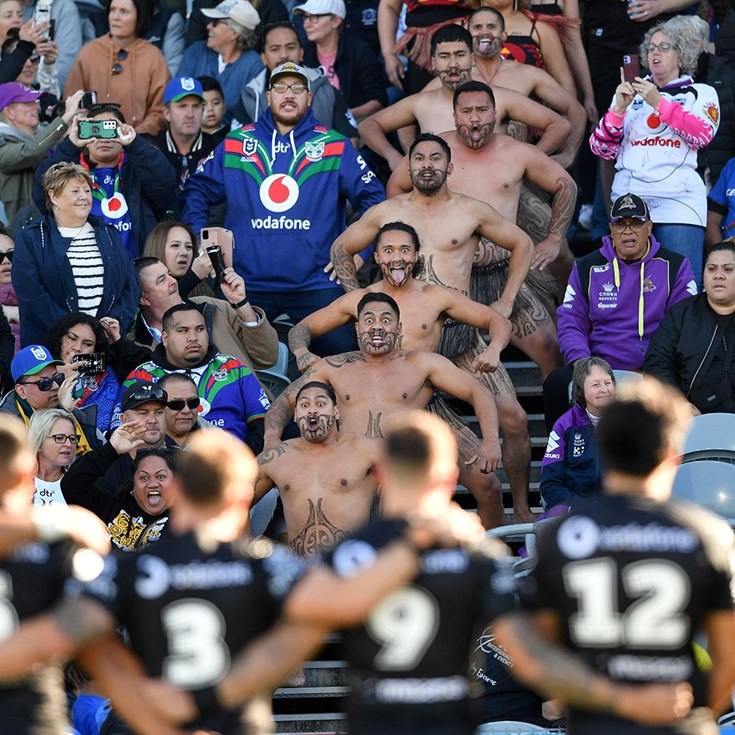