For so long he was being sized up to lead Brisbane's rebuild, but teen tyro Reece Walsh has shown life after Roger Tuivasa-Sheck at the Warriors could be very rosy indeed after helping kill off yet another Cowboys comeback.

Walsh was in everything and then some in just his second NRL outing on Sunday, making miracles and mistakes alike as North Queensland threatened to reel in a 24-4 half-time deficit, only for the Warriors to hang tough for a thrilling four-point win.

With David Fusitu'a re-injuring the hamstring that has plagued him of late 24 hours before kick-off, the Warriors pitched unknown rookie Edward Kosi into a backline already boasting teenagers Walsh and Rocco Berry – the trio totalling just two Telstra Premiership games between them.

For so long in line for the Broncos No.1 jersey, Walsh seems destined to play a decade in the top grade as Tuivasa-Sheck's long-term replacement at the back.

Still, the 18-year-old will do well to match the non-stop drama of just his second NRL outing.

With the contest on the line and the Cowboys roaring home with three second-half tries, Walsh repeatedly jumped into first receiver and took the bulk of the kicking duties.

One bomb was punted long for a seven-tackle set and another long-range break finished with a fumble, but either side of those errors came a critical jailbreak from his own in-goal and a midfield bust that finished with a disallowed try.

"He had some brilliant stuff but he had some stuff when he actually understands the concept of how the game works, he’ll manage things a bit differently," coach Nathan Brown said, seeing the same shades of brilliance as when he was first shown video clips of Newcastle No.1 Kalyn Ponga.

"You want blokes to want to have the ball. He won’t get it right all the time, but he’s confident and he’s got the pace to scare the opposition.

"What surprises me is how he’s very confident, which is really pleasing because he’s just a little footy player. We’ve got to make sure as coaches that we don’t stuff him up, because the reality is we’ve just got to let him play."

When Walsh and fellow playmakers Kodi Nikorima and Tuivasa-Sheck did play, the Cowboys had few answers.

Nikorima especially ran riot up the middle, opening the scoring when he burned past Ben Condon in the seventh minute, then playing the lead role in Ben Murdoch-Masila's 18th-minute try that also featured some helter-skelter playmaking from Walsh.

It was the same when Scott Drinkwater took charge in the second half, scoring one try himself and having a hand in each of the other three scored by North Queensland.

Sublime hands from the Warriors

Jason Taumalolo's return from a second broken hand in as many months did little to shore up the Cowboys defence, with the prize-winning power forward making just three runs for 31 metres and 11 tackles in his first 22-minute stint.

But just as they did last week to upset the Raiders, North Queensland found their way well and truly back into the contest from the playmaking of Drinkwater.

A first-up grubber for Reece Robson to put them on the board was matched by another in which Murray Taulagi dragged the deficit back further after half-time.

The talented pivot then backed up a long-range raid to score his own, reducing the deficit to eight points.

When Drinkwater and Holmes combined with quick hands for Taulagi's second it was anyone's game.

In the end, no one man stood up to claim it. Instead the Warriors hung tough for a victory that will do their youngsters - who already seem to have the world at their feet - a world of good. 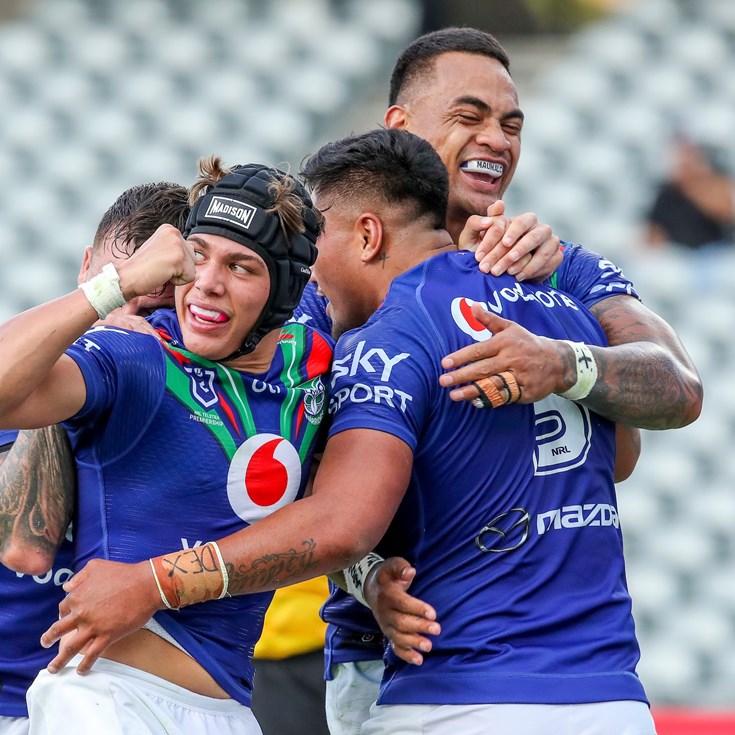 RTS cuts through, Berry backs up for first NRL try

Kosi to debut as replacement for injured Fusitu'a