As the Knights chased late points against the Warriors on Friday night, coach Adam O'Brien was looking for "special" centre Bradman Best to produce a big play.

The 19-year-old duly provided it, busting the line and offloading to winger Hymel Hunt to secure a 20-16 win with five minutes to go.

The explosive left-edge talent, who was in doubt for the match at Central Coast Stadium with an ankle injury, delivered a Matt Gidley-esque flick that gave Hunt his first try earlier in the second half.

"[The ankle] was a bit of a worry in the week, but when I came to Thursday I knew I was ready to go," Best told NRL.com.

"It's just a mental thing, to be honest ... I was pretty angry [after first suffering the injury in round one]. I thought it could have been my syndesmosis, going off my [previous] ankle injuries."

Best the provider again as Hunt grabs a double

Best, who made his NRL debut under now-Warriors coach Nathan Brown at Newcastle in 2019, said his decisive passes came about through instinct mixed with training reps.

"Hymel did all the hard work in the end. He iced it," Best said.

The Knights controlled much of the game, scoring the first try via hooker Jayden Brailey in the 18th minute before claiming a 14-6 lead after half-time thanks to Best and Hunt.

The most pleasing aspect for a "really proud" O'Brien was his team's defensive resilience, which was showcased at the start of proceedings when they repelled the Knights for seven consecutive sets.

"There was a lot of them in a row on our try-line. We showed a lot of grit. With the footy, we were over 90 percent completions ... Early rounds, that's what gets you the result."

The Warriors started terribly by sending the kick-off out on the full, and after being unable to capitalise on the weight of possession as Hunt came up with some cracking tackles, Brailey pounced.

It was the new co-captain's first try since round 24, 2019 – breaking his duck in red and blue after the hard-working former Shark missed most of his maiden season in Newcastle with an ACL injury.

Wayde Egan was controversially denied a dummy-half try by the Bunker for a knock-on but it didn't matter for the Warriors as Ben Murdoch-Masila ran into a hole off Tohu Harris in the 30th minute.

When it appeared as though Newcastle were about to pull clear, Warriors skipper Roger Tuivasa-Sheck passed for two left-edge tries – one to centre Adam Pompey, the other to winger Ken Maumalo – as the hosts edged ahead for the first time with 12 minutes remaining.

Backline execution has the Warriors in the lead

Then Best delivered another piece of brilliance to ensure the Knights started their campaign 2-0 for the second year running.

"You'd like to think at his age, he's got a whole lot more improvement in him," O'Brien added.

"Usually with young, talented guys, [the issue] is around their preparation and keeping their hunger to get their prep right, and you have to constantly be on top of them.

"I don't have to do that with this kid. What you see out there, how focused he looks, that's what you see on Monday morning when he rolls into the joint. He's a determined young man and I'm really fortunate to be able to coach him."

Best dips into his bag of tricks to set up Hunt

The Warriors could cop further blows from the match review committee after Jazz Tevaga (kneeing) and Jamayne Taunoa-Brown (crusher tackle) were placed on report. 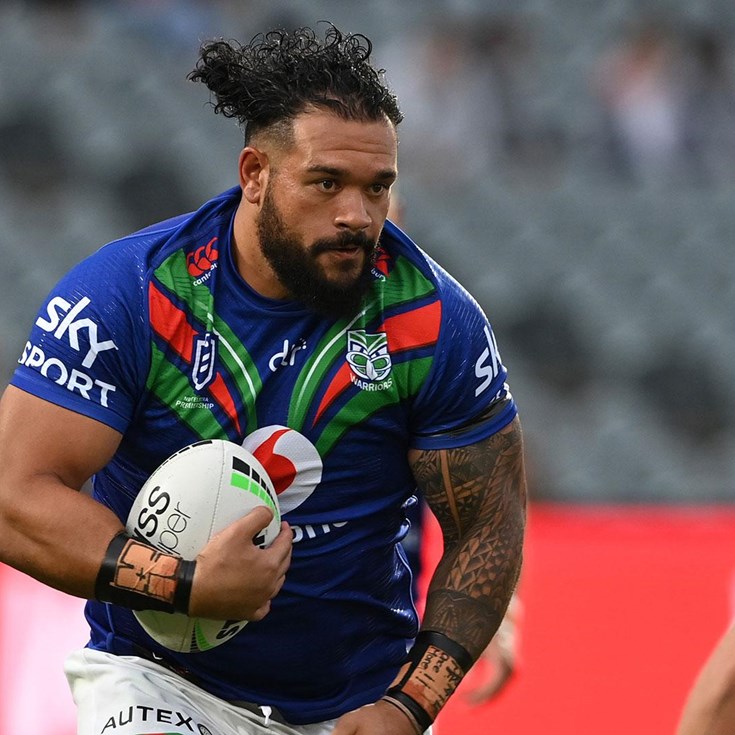 Big boys braced for battle of the behemoths