Manly coach Des Hasler will remember his 400th game for all the wrong reasons, losing the match 26-22 and both his starting props to injury, as a Manly comeback fell short against a fast-starting Warriors.

The visitors hit a 16-0 lead in as many minutes as Manly completely missed the jump.

Making matters worse for Hasler was the loss of Addin Fonua-Blake to a lower leg cork in the 20th minute and Marty Taupau to a swinging arm from Jack Hetherington in the 52nd.

"It was a terrible start. We didn't recover from it well; 16 points on the board and from there we were trying to claw it back, it's a difficult position," Hasler said.

"We just didn’t apply ourselves, there were a couple of soft tries, one just before half-time and one straight after.

It's something we need to fix pretty quickly."

The Warriors had to endure two sin-bins as well as Manly's fightback but held on for a second straight win – the first time this season they've recorded successive victories.

Things started in the worst fashion for the home side as Cherry-Evans was pushed into touch from the opening kick-off. The Warriors receiving four fresh sets courtesy of two six-again calls, a Manly knock-down and a penalty before Patrick Herbert cracked the Sea Eagles with a brilliant collection of a Nikorima cross-field kick.

The Warriors cruised back down Manly's end and made it 10-nil when Eliesa Katoa swooped on a Chanel Harris-Tavita grubber and the wheels looked to have fallen off for the Sea Eagles when George Jennings made a mockery of their right edge defence for a 16-0 lead in as many minutes.

Herbert plants it down at speed

The turning point came when Roger Tuivasa-Sheck fumbled a kick ahead from Reuben Garrick handing the Sea Eagles a rare full attacking set. A Cherry-Evans short ball to Jake Trbojevic all but led to points and although the Manly lock was held up, Karl Lawton was sin-binned for initiating contact before Trbojevic received it.

The 12-man Warriors line was split twice before Lawton's return, with Tevita Vuna strolling through a huge gap in the 23rd minute and Cherry-Evans sending Moses Suli over from a scrum play in the 30th.

The Warriors jagged one back before the break, piggy-backed in range by a Lachlan Croker crusher penalty, with a Peta Hiku draw and pass leading to an athletic Herbert put-down just inside the corner post for a 20-10 half-time lead.

The Warriors started the second half strongly and extended their lead through Hiku as he touched down on a well-weighted Nikorima grubber.

Things flared up in the 52nd minute with the Warriors enduring some sustained pressure on their line. Fiery Panthers loan prop Hetherington caught Marty Taupau across the jaw with a wild swinging arm which cost Manly their second starting prop for the game.

Hetherington landed on report and in the sin bin and was probably fortunate to avoid a send-off.

Back on the field after his stint in the bin, Hetherington was a villain to the 1340 hardy souls that braved the pouring rain.

Taufua try gets the Sea Eagles to within four

He turned their boos to jeers with a knock-on that set Manly on the attack and a left side play allowed Funa to offload for Jorge Taufua to score.

It was also Manly's first against a 13-man defensive line, while Garrick's sideline conversion reduced the margin to 26-22 to set up a grandstand finish.

Despite some late attacking chances however, including a penalty at the Warriors' line in the 77th minute, the visitors held on grimly for a win that puts Manly's finals hopes in serious jeopardy.

"We've been talking the talk for a while and tonight we finally walked it. I'm really proud of the group of men we have representing our club," said Warriors interim coach Todd Payten.

"I said last week that's been coming for a while, we've been taking small steps in the right direction. Our defence has improved.

"That last eight or nine minutes we were under the pump and we just hung in there which is the sign of a strong, developing team." 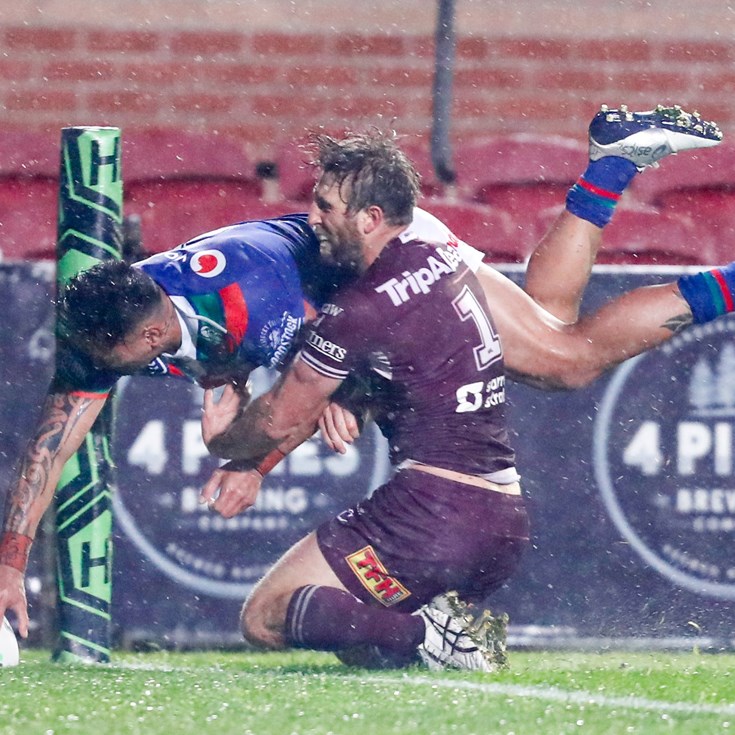 George: There are so many balls in the air