An outstanding second half display has given the Vodafone Warriors their first-ever win over Canterbury-Bankstown at Westpac Stadium after they held on for a famous 24-20 win in tonight's seventh-round NRL match in the Capital.

In five previous encounters with the Bulldogs in Wellington, the Vodafone Warriors had lost four times and drawn once.

And at halftime tonight they'd seen an early 8-0 lead converted into an 8-14 deficit.

But they erupted in the second spell with three unanswered tries in 23 minutes after the break catapulting them into what would prove to be a match-winning position.

First Shaun Johnson produced a splendid eyes-up last tackle play in the 46th minute, floating a kick wide to the left beyond Bulldogs wing Sam Perrett for his Vodafone Warriors opposite Jonathan Wright to collect for his 34th career try.

The conversion failed but from the restart the Vodafone Warriors were straight back at the Bulldogs, Tuimoala Lolohea jumping into dummy half, showing to his right but spinning to the left and driving across between Bulldogs centre Kerrod Holland and second rower Josh Jackson.

To the joy of the majority of the crowd, Johnson spliced the posts for the first time in four attempts to transform an 8-14 margin into an 18-14 lead in the space of three minutes.

The contest rocked and rolled for the next few minutes, the Vodafone Warriors seemingly set to cross through their right - but denied - and the Bulldogs likewise at the other end only for Tuimoala Lolohea to brilliantly defuse the danger.

There was a mix of intensity and aggression not to mention confidence as the Vodafone Warriors maintained the rage and, in the 63rd minute, the pressure really paid off.

Having forced a another Bulldogs error, the 'away' side put together a try which was pure rugby league poetry, surely the team's best-constructed try of the season.

Thomas Leuluai had stamped his mark on the match the moment he came on in the halves after Roger Tuivasa-Sheck's early departure with a leg injury.

In the key play of the night, he teased the line heading across the field, going out the back to Johnson, on to Issac Luke, and then to Lolohea to put centre Blake Ayshford across for his second try of the night. The laa work was on point as was Johnson’s conversion to push the lead out to 24-14.

The Bulldogs, though, were always going to stay in the contest. Nothing was more certain. They probed with a threatening chip wide to the right and then a grubber up the middle into the in-goal, both of which had the Vodafone Warriors stretched to cover.

Then in the 75th minute superb passing on a short side stacked with five players outwitted the Vodafone Warriors down their left edge, creating a try for centre Kerrod Holland which he converted to leave his side only four points adrift with four minutes to play.

Hearts were beating at least irregularly over the final stages but the Vodafone Warriors closed it out from there for a superb victory, punctuated by Luke dancing and pirouetting his way through the last seconds until the final siren.

With that moment the Vodafone Warriors had:

The memorable victory was all the more satisfying after the Bulldog, as the 'home' side, had played some pre-game tricks with their line-up, putting their most experienced front rowers James Graham and Aiden Tolman on the bench and starting with giants David Klemmer and Tim Browne.

After the Vodafone Warriors were typically the first side handed an early penalty, they responded by defending aggressively, forcing an error out of Jackson.

In good ball territory, the Vodafone Warriors set up on their left, great ball work putting centre Solomone Kata over for what was surely his eight try of the season. Inexplicably the final transfer was ruled forward on a touch judge's call when replays suggested otherwise.

If the no-try call was at best unfortunate, it gave way to real concern with Tuivasa-Sheck on the ground needing treatment for a leg injury. In the 17th minute he was forced off the field for the night and will need scans in the next few days.

With the backline rearranged – Leuluai coming on in the halves and Lolohea going to fullback – the Vodafone Warriors stayed up tempo.

They forced a line dropout and came at the Bulldogs brimming with intent on the repeat set.

They went to a short side, prop Sam Lisone at first receiver pushing a nice pass to Johnson who floated the ball wide to a surging David Fusitu’a on the right wing for his 10th career try. Johnson’s conversion was well off the mark but the 4-0 lead after nine minutes was the least the Vodafone Warriors deserved.

Three minutes later 4-0 became 8-0 as the Vodafone Warriors had their off load game going, Johnson given room to break clear down the right. He was stopped but soon after the Vodafone Warriors were in business on a short right side again, Luke serving the ball up to Johnson and Ayshford stepping inside Curtis Rona to reach out to slam the ball down for his third try of the season. Johnson's conversion attempt again faded away in the breeze.

The lead should have been extended in the 20th minute but Kata, charging towards the line on a potent angled run, had the ball dislodged as he was putting it down.

The Bulldogs turned the let-off into profit, coming downfield through a Vodafone Warriors knock-on and then a penalty to pile on the pressure.

With the influential Graham now on the field as well as the enormous Sam Kasiano, the complexion of the contest suddenly changed.

The Bulldogs created space on the right, a brilliant wide ball sending Perrett in for the the first of two quick tries. Holland’s conversion attempt was well wide leaving the score 8-4 in the Vodafone Warriors’ favour after 22 minutes.

Four minutes later Perrett was over again on the right, acrobatically so as he was flung skywards in contact. Holland’s conversion was on target for a 10-8 lead.

A Vodafone Warriors error bringing the ball out of their red zone had the defence on high alert again as the Bulldogs came at them from all angles but they held firm to force a handover.

The Vodafone Warriors should have been able to hold the Bulldogs out until halftime after Johnson put a kick into touch deep inside their opponents’ territory with two minutes left; instead the Bulldogs made inroads down a short right, slick ball work and backing up creating a try in the corner for Holland. His conversion was hopelessly off target but his side had a 14-8 halftime edge.

The Vodafone Warriors' two tries straight after halftime were the defining moments of the game, twin strikes which quickly took the momentum away from the Bulldogs to alter the shape of the contest.

Despite facing adversity after losing one of their marquee players in Tuivasa-Sheck, the Vodafone Warriors were transformed into a galvanised force as they protected their lead for an invaluable win.

They now have a nine-day turnaround to prepare for the return of their traditional Anzac Day fixture against the Storm in Melbourne, an occasion which was shelved last year as the NRL marked the 100th anniversary of the Gallipoli landings.

They'll go into the match buoyed by their three recent wins if tempered as they await details of Tuivasa-Sheck's injury. 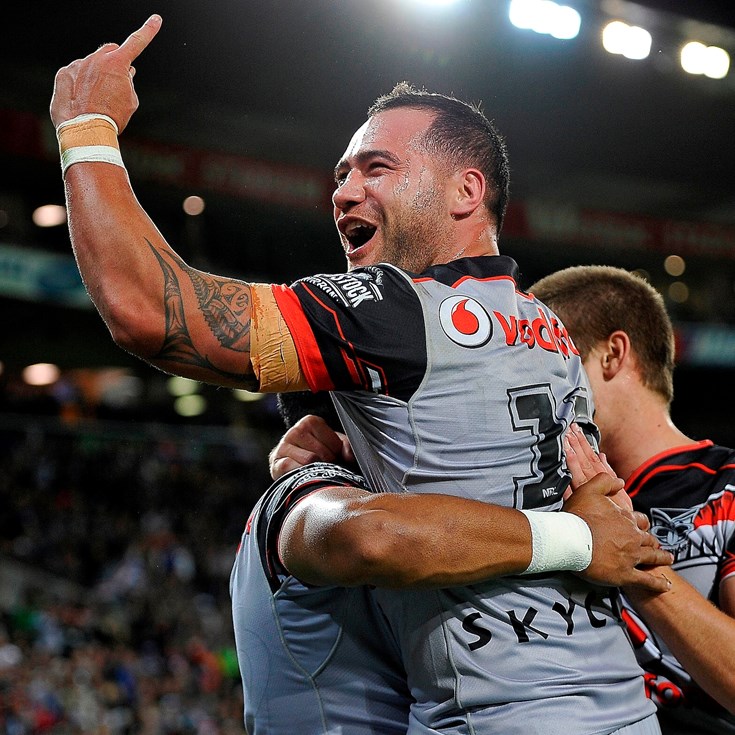 Historic win over Bulldogs in Capital