It's been an emotional rollercoaster of a summer for Honey Hireme-Smiler - her first surgery in preparation for a big league season, a Queen's honour, and getting ready to run her first marathon for her late mum.

Honey Hireme-Smiler has never liked running. In fact, she's always tried to sidestep it when she's not on the rugby field.

And yet, the rugby and league megastar is now preparing to run a marathon along the Great Wall of China – including 5164 steep steps.

In May, the Kiwi Ferns captain will tackle one of the world's most demanding 42km marathons, in the memory of her mum, Caryn.

Hireme-Smiler put her league career aside for three months last year, missing the entire NRLW season with the Warriors so she could be a full-time carer to her mum, who had a rare and aggressive stomach cancer. Caryn, 62, passed away in September.

"I decided I wanted to do the marathon because Mum walked it at the age of 60," Hireme-Smiler says.

"Back when Mum did it, she asked me if I wanted to come along, and I was like 'Nah, it's not really my thing'.

"But now I'd like to do it in her honour, to walk in her footsteps and experience just what she went through. It was one of the biggest challenges she faced in her life."

Hireme-Smiler's training for the Great Wall Marathon has been hindered, though, by her recovery from shoulder surgery she underwent last month. It was the first time in her 31-year sporting career she's had to go under the knife.

She suffered the injury back in 2017, playing international rugby for the Black Ferns.

"That's why I didn't go to the Women's Rugby World Cup that year. When I saw the docs, they said 'It's probably best you have surgery'," she says.

"But I disagreed and went off to play at the Rugby League World Cup - and I made it worse. I've been managing it with cortisone [injections] and putting the surgery off. And I've kept playing, and playing pretty well."

Her most recent accomplishment was leading New Zealand to victory in the inaugural Rugby League Nines World Cup in Sydney in October.

When she couldn't delay it any further, Hireme-Smiler had the operation to reattach tendons which had torn away.

Still cant believe that this little māori girl from Putaruru got to walk around Buckingham Palace & meet the Duke of sussex Prince Harry while representing @NZRL_Kiwis for the official @RLWC2021 draw! Definitely ticked the bucket list today. ✅ #RLWC2021Draw @WRugbyLeague pic.twitter.com/OjlHXB8ASm

The 38-year-old wants her body to be in the best possible shape for next year's Rugby League World Cup in England.

"I really want to play through to the World Cup – it will be my fifth one. I probably have even more drive to get out there and play now," she says.

"I always find that in the year before, you do the big grind, so I know it's going to be a tough year. It's about proving that, come 2021, I'm ready to go physically. I need to push my body to its limits this year, to test it out and be involved in as much rugby league as I can."

"But I really can't run with it, so it's hindered my plans. I was told I could walk or jog as long as I kept my elbow at my hip… or it could tear again," she says.

"Mentally, it's been really tough. I've never been in this situation before, and I'm really struggling with it."

Ready for my first ever Surgery! Smiling on the outside but definitely nervous on the outside! Getn shoulder done but il be ready to go come league season 2020 💪 #womensrugbyleague #1steversurgery #38yearsyoung pic.twitter.com/VVol9ySpLz

But the running she has been able to do has been cathartic, after losing the mother she was so close to. Caryn lived in a granny flat behind Hireme-Smiler's Hamilton home.

"I've found it to be a real healing thing for me. I'm still going through a fair chunk of grief, and running has been helping me through it, emotionally and mentally," she explains. "If I'm feeling a bit down, I'll chuck on my shoes and go out.

"By the time I get back, I feel so much better. It puts me in Mum's shoes. She would go out and do 20km walks, and I'd say 'You're crazy'. Now I understand.

"And it's given me something different – rather than just running up and down a field, tackling people, hitting tackle bags, going to the gym. It's a totally different mindset you have to have to run."

Just before her surgery, she ran the Tongariro Crossing with her wife, Rochelle. The challenging 19km was the longest distance Hireme-Smiler had ever run.

Forced to take a rest in the last few weeks, Hireme-Smiler has just been to London, to visit Buckingham Palace and Prince Harry, for the draw for the 2021 Rugby League World Cup. She was surprised there by Prince Harry, greeting her with a hongi.

She will have to miss playing for the Warriors women at the NRL Nines next month but will still go with the team to Perth as part of the coaching staff.

"I should be back playing full contact [league] again in April or May, which will make me available for the international season with the Kiwi Ferns," she says. "And I'm looking to do the NRLW season with the Warriors. And then I have a marathon on top of that!"

Hireme-Smiler will run the marathon with the Influence Crew, who same team who supported Caryn through her China marathon. The crew is headed by Auckland man Doug Healey, who broke his back in a work accident and had to learn to walk again, and now leads Kiwis to marathons around the world.

New Year's Eve was an especially emotional day for Hireme-Smiler - the day it was announced she became a Member of the New Zealand Order in the New Year Honours for her services to rugby league; and her mother's birthday.

"When I first got the letter, I burst into tears. It arrived a week after burying Mum," she says.

"It's always nice to be acknowledged for the work you do, giving back to something you get so much joy from. The way I see it, it's not really about my performances on the field, but what I do off the field, which leaves more of a legacy than when I'm playing.

"It's also encouraged me that I'm on the right path. I'm genuinely in love with sport – rugby and rugby league – and whatever ways I can continue to give back. It's a true calling for me; it's what makes me happy.

"A playing career is only for a short time, and I'm definitely coming to the end of that. So I'm grateful I have a lot of other avenues that help me stay involved in the game."

She will continue her work with Sky Sport this year, commentating on Super Rugby and the NRL. And she'll be in the crowd cheering on the Black Ferns this weekend at the NZ Sevens tournament in her hometown of Hamilton.

Its not az easy as it looks or sounds but when you get to work alongside and learn from the pros it makes it a whole lot easier and enjoyable. Love being able to stay involved in sport in someway when im not able to physically play for the next couple months. Thank you for an awesome wkend @skysportnz @rikkis @kenlaban @kirstiestanway @vwolfgramm @piriweepu9 @michaelablyde Il keep working on my one liners before the nxt torney 🤭🤦🏽‍♀️ #commentarycrew

She's back at work at the Halberg Foundation in the Waikato, in her role as a disability sports advisor - working with young people with physical disabilities to play sport or do physical activity.

"The biggest buzz for me is seeing that moment on their faces when they're having fun and getting those endorphins. I know that feeling, I love that feeling, I want others to feel that too. It's so rewarding," she says.

There are days, she laughs, when she has to remind herself that she married Rochelle four months ago, in the chapel at Waikato Hospital. The wedding was rushed forward so Caryn could be present.

"Mum knew Rochelle was going to be my rock when she wasn't here anymore. And she has been, 100 percent," Hireme-Smiler says.

"It's been a difficult time. Throughout Mum's illness I held myself to a level of strength that I had to have for her, because I was her carer. After she passed, there was a delayed realisation that Mum has actually gone now. I don't shy away from it and I'm not ashamed of it; I just accept it's a process I've got to go through.

"It's going to be tough for a while, but that's what grief is. It's a reflection of how much you really loved that person."

This story was originally published on LockerRoom.co.nz 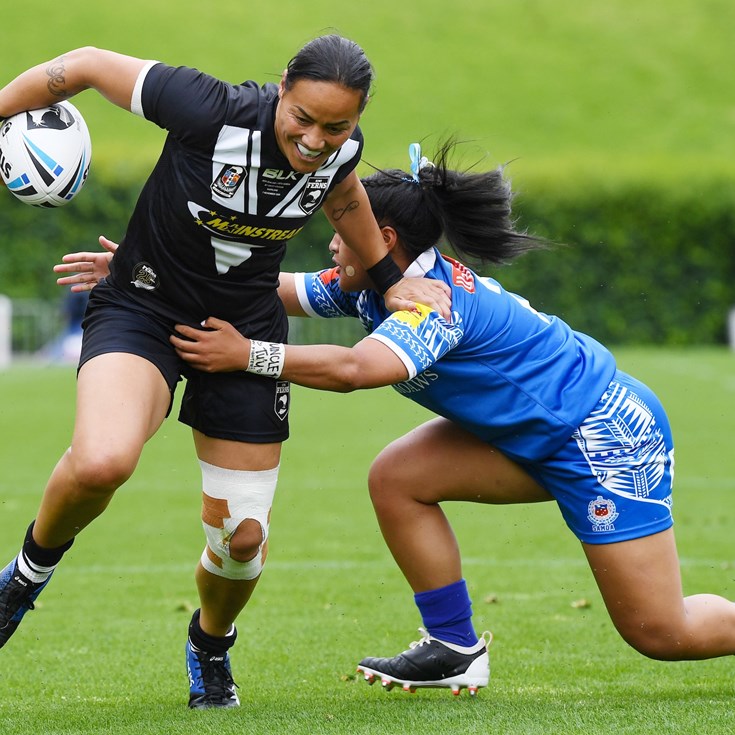 Honey on retirement: I knew my body was tiring