The Vodafone Warriors secured a welcome 28-12 win over the Newcastle Knights in their eighth-round Canterbury Cup NSW encounter at a sunny Mount Smart Stadium on Sunday afternoon.

The home side had one big change coming into this game with 93-game NRL centre Solomone Kata in the side after dropping out of the first-grade squad.

He was replaced by Patrick Herbert, who made an excellent debut on Anzac Day against the Storm, following a strong start to the season in the Canterbury Cup side.

Eventually, after some good work by Cole Waaka and Taane Milne in the buildup, Phillip Makatoa scored between the posts. The home side certainly deserved their early 6-0 lead.

The Vodafone Warriors really should’ve added to their lead in the next 15 minutes, as they enjoyed a serious territorial advantage. The closest they got was a dive for the line by Karl Lawton but he lost the ball.

They were made to rue their inefficiency in the 31st minute when the Knights crossed after a couple of costly penalties and some scintillating play down the left edge.

It came from a beautiful flick by former Vodafone Warrior Mason Lino to winger Kiah Cooper who barged over but Lino couldn’t add the extras making the score 6-4.

The Vodafone Warriors looked to take their advantage into the break but needlessly gave away an offside penalty as the hooter went. Lino landed the easy goal from in front to lock the scores at 6-6 as the teams headed to the sheds.

The Vodafone Warriors again started the better side after the break with a good Waaka run setting up space for Blake Ayshford to pop a fantastic offload for Setu Tu to finish off in the corner. Keighran’s kick was wide.

The Knights looked to have blown a great chance close to the line when their attack collapsed and forced them back to the 20-metre line. Lino then did really well to burst forward and put a nice kick along the deck for Sam Stone to run on to and score 10 metres in from touch.

Lino’s conversion went straight over the black dot and gave the Knights their first lead with 17 minutes to go.

It didn’t last long. Ayshford came up with some more magic to put the Vodafone Warriors back in front. He bounced off three tacklers 10 metres out and then cut his way back through the big gap he’d created to dive over next to the posts.

Instead of going into their shell, the last 10 saw the Vodafone Warriors press on to extend their lead. Tu, who had a fine game all round, got loose down his wing again, then got a miracle ball away to a flying Paul Turner who collected amazingly to collect and score in the corner.

Keighran nailed the conversion but the Vodafone Warriors weren’t done yet.

From Newcastle's short kickoff, Adam Tuimavave-Gerrard smashed his way through the line on halfway and got a ball away to Jackson Frei to score under the posts.

It sealed an important win for the Vodafone Warriors, snapping a three-game losing streak. 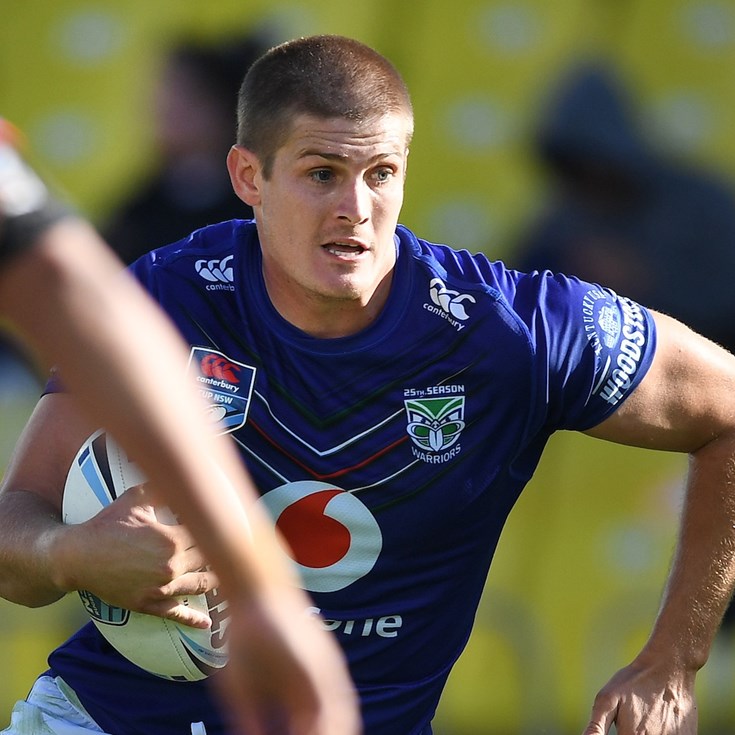