Roger Tuivasa-Sheck left New Zealand straight out of school because the Roosters told him he would train and potentially play as a full-time first-grader, and be paid accordingly.

The chance to study at Sydney Uni was sold, moves to bring his younger brother Johnny across were made too, and the Warriors were once again trumped for the best talent in their own backyard.

Tuivasa-Sheck is now back in his Auckland, captaining the club as the reigning Dally M medallist.

Adam Blair, Tohu Harris, Peta Hiku, Leeson Ah Mau and Agnatius Paasi all once were Warriors as teens too, or should have been, only to chase NRL starts across the Tasman.

After years of watching New Zealand's best and brightest turn out against its only NRL club, 70-odd years of rugby league knowledge and scouting experience was lured in the opposite direction.

Talent scout Peter O'Sullivan – who brought Tuivasa-Sheck to the Roosters and put him up for his first few weeks in Sydney - went "from being the poacher to the gatekeeper" of Kiwi kids.

In his previous life as a career clipboard carrier, Brian Smith "was actually very keen on being the Warriors first coach in 1995".

Now the high profile off-field recruits have set about rectifying Stephen Kearney's blunt assessment after nine straight losses to finish the 2017 season: "we've got ourselves to blame … we've taken our eye off the ball in developing that talent."

Club-wide reviews followed that dismal first season under Kearney, which also proved the last year for the game's under 20s National Youth Competition.

The Junior Warriors dominated the NYC with three titles in its 10 seasons and over 50 NRL graduates from its ranks.

But it mattered for little when the first-grade side couldn't translate that success into results.

Or when some of the nation's best under 20s talent – Hiku, Siosiua Taukeiaho, Sosaia Feki – sought their fortunes, and found premierships and Test jerseys, elsewhere.

With no more under 20s to offer an obvious pathway in the rugby-mad isles, Smith and his crew are making plain what wasn't obvious to Tuivasa-Sheck at the age of 18.

"It's not about signing them to contracts, we're showing the pathway that's improved from what they think or what it has been in the past," Smith said.

"We're offering kids a real opportunity to see how we work and what their pathway looks like, how we can help them."

"Greg Boulous heads up our program after working at Westfield Sports High – he's got an innate knowledge of kids that age and that elite level coaching.

"Junior Mautairi handles all things about physical and mental preparation - they offer more support and better opportunities to prepare themselves for that possible NRL pathway.

"Wellbeing and a whole of a game approach is a big part of it, it’s a more professional approach that's been picked out as we identify and want to retain our talent."

Keeping Kiwis in the game

With 48% of NRL players boasting Pacific heritage, head office estimates at least 35% of first-graders would be eligible for New Zealand.

Smith is doing his own research too.

"We're starting to get numbers on how many kids are going to Australia from New Zealand and where they are three to five years later," he says.

"And unfortunately there's a huge percentage of them that have dropped out of the game. Lots of these guys come back and there's probably a bit of a cultural element to it, a natural thing where there's embarrassment, a feeling they might've let their families down.

"A lot of them turn their back on the game, that's the most alarming thing I've seen so far."

The Warriors know full well they can't keep rugby league's most genetically pre-disposed people all to themselves, or even all of the best of them.

It's not about signing them to contracts, we're showing the pathway that's improved.

But having trodden the well-worn path away from the Warriors, Tuivasa-Sheck understands there is an equally entrenched school of thought among young Kiwi players.

"Unfortunately our systems in previous years weren't that good at keeping players behind in NZ," Tuivasa-Sheck told NRL.com.

"What's the best way to change that Kiwi mindset - to choose the Warriors as your number one pick instead of going to Oz?

"For me it was a shot at playing NRL. That's what got me to the Roosters back then. Sully really believed in what I could do, and I knew that, he made it clear.

"I was playing both codes when I was at school and I was at the [Warriors] academy. There was something going on there but the thing with Australia, there's a lot more options and a lot more teams. It was tough to stay in NZ in that sense.

"That's why I went over and those are the kind of opportunities we want to create at home so that Kiwi kids want to stay and play with us."

The Warriors have always shaped up to five Super Rugby franchises and the indomitable lure of the All Blacks whenever a schoolboy star has caught the eye.

The spat over Etene Nanai-Seturo last season, who was named for New Zealand's rugby sevens side before linking with the Waikato Chiefs while still contracted to the Warriors, is the latest of a few over the years.

Success is intrinsic to any stoush for a player. Melbourne have trumped Super Rugby bids for Nelson Asofa-Solomona and Suliasi Vunivalu in recent times, but ready examples of similar Warriors coups are not so obvious.

In turn, Smith sees enough talent among 4.8 million New Zealanders for the Warriors to more than hold their own against rugby.

"It's the 15 other NRL clubs that are the biggest competitors," he muses.

"But ever since the Warriors came into the competition Aussie clubs have targeted New Zealand players.

"The difference now is they used to target players generally 21-23 years old. Now they're looking at 14 and 15-year-olds, which is a scary thought."

Back to the future

If the Warriors can build on last year's finals appearance with another strong season, momentum builds.

If the club can keep next-gen local products Isaiah Papali'i, Bunty Afoa, Jazz Tevaga, Nathaniel Roache and Chanel Harris-Tavita tracking as they are alongside their established stars, they should.

Suddenly staying at home is looking pretty good for the next Kiwi wunderkind.

"The Warriors want to be a powerhouse full stop and that starts with development - that same structure you see across the best clubs and franchises across the game," Smith said.

"There's one thing that we as a club recognise - it'd be fantastic to win that first title and that's the goal.

"But we're determined that when we do win it, that we're well placed to give it another crack again and again, build something with real foundations from the bottom right through to the top.

"The support for this club is unbelievable. They're very passionate, and we owe it to that supporter base to grow the club and build on that, give New Zealand the NRL club they deserve". 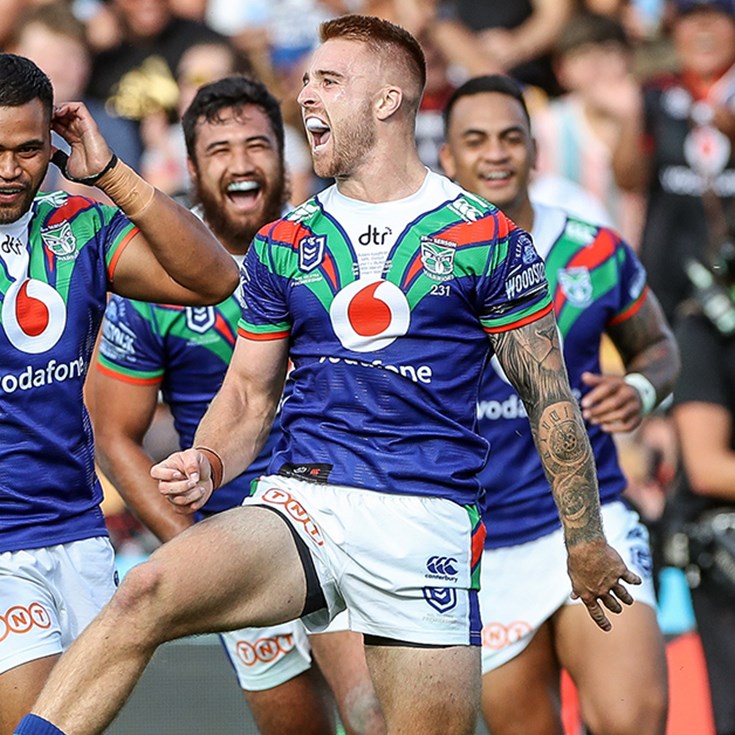 An emotional win to start the season