The New Zealand Warriors have wrapped up preparations for the 2019 NRL season in impressive style, beating the Wests Tigers 26-16 with a dominant performance in Saturday's trial at Whangarei's Northland Events Centre.

The Warriors built a 14-6 half-time lead, with captain Roger Tuivasa-Sheck and skilful backrower Tohu Harris featuring prominently in the lead-up to tries to wingers Ken Maumalo and David Fusitu'a – who both finished with doubles.

After nullifying a few early second-half raids from the visitors, the Warriors stretched the lead to 14 with Fusitu'a's second try and played the last 30 minutes as strongly as they did the first to claim a convincing win for coach Stephen Kearney.

Halfback Luke Brooks was the standout for the Tigers, but they looked disjointed more often than not in attack and new coach Michael Maguire still has some kinks to iron out a fortnight out from their season-opener against Manly at Leichhardt Oval.

The Warriors' workmanlike defensive effort complemented their enterprising attack and they will take plenty of confidence into their first-round home game against the Bulldogs on March 16.

Five-eighth Adam Keighran appeared certain to score on the right side in the fifth minute, only to be cut down by a try-saving tackle.

The Warriors shifted the ball left, with Tuivasa-Sheck finding Tohu Harris, who threw an overhead pass to an unmarked Ken Maumalo for a try in the corner. Keighran missed the sideline conversion.

The Tigers almost hit back when Esan Marsters went close but the Warriors kept them out and quickly counter-attacked.

Fusitu'a posted the Warriors' second try after collecting a perfectly-weighted cut-out pass from Tuivasa-Sheck. Keighran shanked his conversion attempt and it remained 8-0.

A Tuivasa-Sheck error led to the Tigers' opening try, as veteran schemer Benji Marshall combined with off-season recruit Ryan Matterson to send Luke Brooks over. Marsters added the extras to make it 8-6.

The Warriors made the most of a purposeful set with five minutes left in the half, spreading the ball through quick hands for Maumalo to power over for his second try. Chanel Harris-Tavita took over the goalkicking duties, nailing the sideline conversion for a 14-6 half-time lead.

Both coaches rotated their playing rosters in the second half to test various combinations.

Fusitu'a scored in the corner, with Keighran making good on the conversion for a 20-6 lead.

Former Wyong Roos player Adam Pompey pounced onto a neat chip-kick for his team's fifth try, with Harris-Tavita's conversion extending the margin to 20.

The Tigers added some respectability to the score with late tries to Luke Garner and Marsters, with Marsters converting one from two. 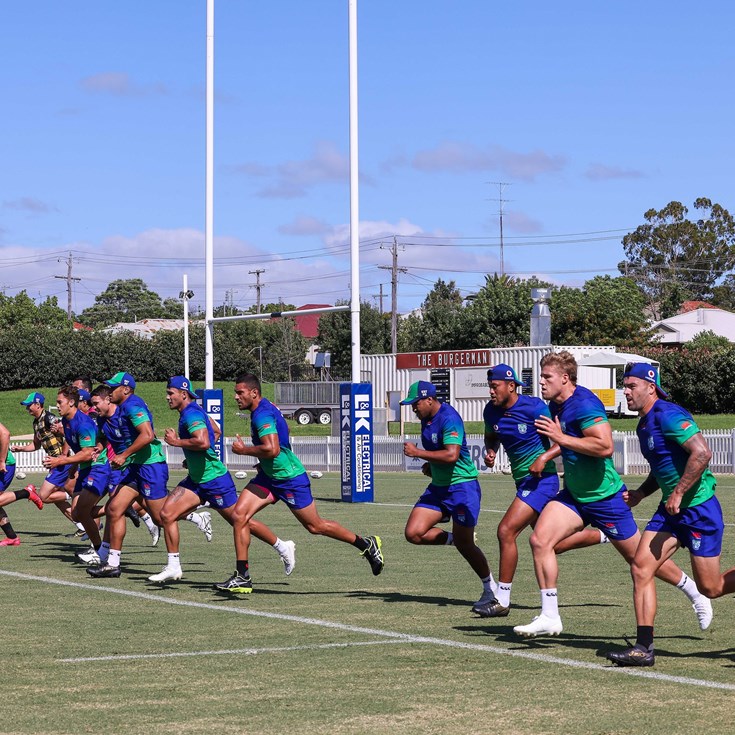