Tough loss for the Warriors last week – their fourth at home this season. Their determined effort against the premiers would've been sufficient to beat most teams, but the Storm are the masters of low-scoring trench warfare and the Warriors shouldn't have lost any confidence.

Strangely enough, the Warriors have been more successful on the road than they have at home so they should feel good about their chances against arguably the competition's most inconsistent team. They also have a lot more to play for than the Titans and look they're in a finals frame of mind judging by last week's committed display.

They need Blake Green to return fully fit but the Warriors should still be aiming for a top-four finish, despite the solid form of the teams above them.

The Titans ruined their faint finals hopes by blowing a 24-10 lead against the Knights last week and their main motivation now will be to play a nuisance role in the run to the finals.

Key match-up: Ash Taylor v Shaun Johnson. Taylor has come under fire at different stages of the season and has been feeling the heat again lately after some up-and-down performances. The main knock on Taylor is that he looks content to sit back and let the game happen around him, rather than taking ownership of his team and putting his stamp on the game. He does it at times but the Titans would be a lot better if he could motivate himself to stay switched on for 80 minutes. He should embrace the challenge of out-playing Johnson. It may or may not be good enough to get his team a win but at least it might get a few critics off his back.

For the Titans to win: Again the main factor here is what the Titans get out of Taylor. If he can weave some of the magic he's capable of and be a true leader, an upset isn't out of the question. The Titans also need a collectively strong performance from their forwards to try to take some of the sting out of the Warriors' big pack.

For the Warriors to win: The Warriors should have too much attacking potency in their spine, especially the irrepressible Isaac Luke. If Luke, Johnson and Roger Tuivasa-Sheck lead the way the Warriors will have too much pace out wide. They should also look to utilise their size and speed up front.

Titans Stat Attack: Fullback Michael Gordon may be in the twilight of his career but he still gives it his all each week, leading the entire league in support runs with 496 (well ahead of the second-placed Luke Keary's 432).

Warriors Stat Attack: The Warriors dominate this match-up, winning 14 of their past 15 games against the Gold Coast. They are unbeaten at Cbus Super Stadium since 2010. David Fusitu'a has scored seven tries in seven games against the Titans.

And another thing: Since joining the NRL in 1995 as the only non-Australian club, the Warriors have qualified for the finals seven times, capturing their only minor premiership in 2002 and playing in two grand finals ('02, '11). If they were to end up dropping out of the top eight it would be their longest finals drought (eight years) in club history. The Titans have been in the competition since 2007 and reached the playoffs three times.

Titans: The Titans will start the match 1-17 after Brendan Elliott and Kane Elgey were dropped from the bench an hour before kick-off. Will Matthews replaces Leilani Latu on the bench in the only change.

Warriors: Blake Green returns at five-eighth for Mason Lino, but Isaac Luke and Tohu Harris are both out, replaced by Jazz Tevaga and Joseph Vuna. Simon Mannering moves to lock with Adam Blair suspended. Sam Lisone replaces Tevita Satae on the bench. In the omissions that came an hour before kick-off, Peta Hiku and Mason Lino were the two players left out.

Petero Civoniceva's prediction: I think the Warriors win this one. They weren't too far off the mark against the Storm and they've got a lot to play for, so I see them competing strongly through to the end of the year. The other factor is that the Warriors have been one of the best teams on the road, even though they haven't been as successful at home. The Titans had a good lead last week against Newcastle and couldn't finish the job and I just don't see them winning this game given what's at stake for the Warriors. 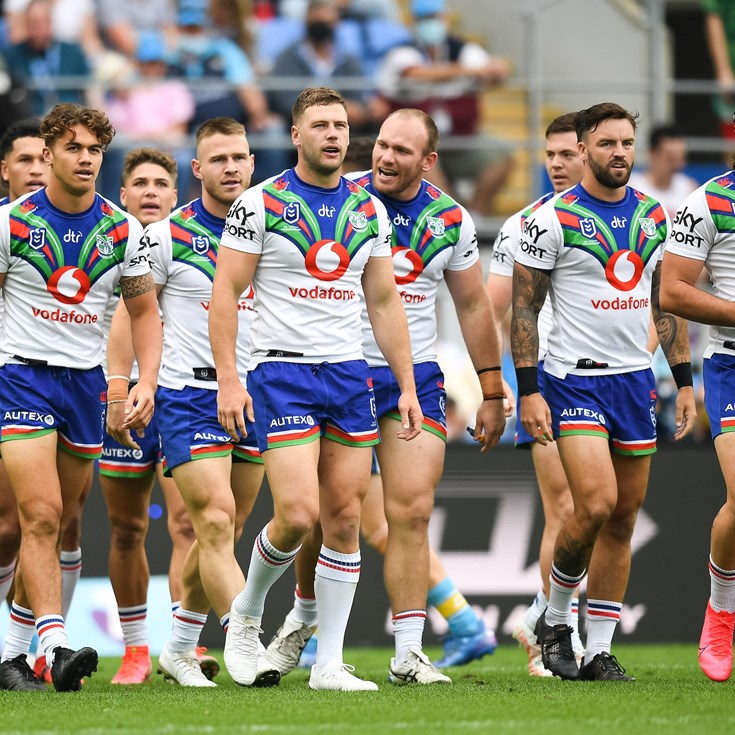 Harris back to start against the Titans

'It has been a positive learning experience' - Kearney