Rookie Penrith halfback Jarome Luai scored two tries and set up another to help cause one of the upsets of the season as the Panthers cruised to a 36-4 victory over the Warriors at Penrith Stadium on Friday night.

NSW representatives Nathan Cleary, James Maloney and Tyrone Peachey watched on from the sidelines as the under-strength side ran in six unanswered tries on the back of a healthy 57 per cent possession in the opening half.

But it was Luai who stole the show with a jack-in-the-box performance to help keep the Panthers in the top four of the Telstra Premiership after a week of speculation over Anthony Griffin's future.

The Warriors, who were at full strength and coming off a narrow three-point loss to Cronulla last weekend, looked to throw the ball around early. But it ultimately led to their downfall as they disrespected the opposition with an ill-disciplined performance, conceding 10 penalties.

Back-to-back forward passes via Shaun Johnson and Roger Tuivasa-Sheck halted cohesion as the visitors struggled to contain an energetic Panthers outfit, who grew in confidence as the game went on.

Stand-in halfback Luai, who represented Samoa in last year's World Cup, set up Penrith's first try for Tyrone Phillips [25th minute] before darting over for his own four minutes later.

The 21-year-old sent Phillips over with a deft kick to the left-hand corner before taking advantage of a poor defensive read from Warriors prop Chris Satae close to the line to step inside and score himself next to the posts.

Penrith continued to find in-roads, while Luai slotted a penalty goal. He missed another on the siren after prop Jack Hetherington got through some lazy middle defence to race 50 metres.

The Warriors came out in the second half in a more threatening mood, but a returning Waqa Blake, who hadn't played since round five with an ankle injury, made his presence felt as he knocked a diving David Fusitua into touch to turn the visitors away in one of their only chances.

Blake then turned defence into attack when he linked with Phillips on the left edge for Penrith's third with former Panther Peta Hiku having an unhappy night out.

The result was sealed with a quarter of the game remaining when fill-in five-eighth Tyrone May kept the ball alive for Viliame Kikau to crash his way over the line for a 24-0 advantage.

Penrith weren't done with yet and the tries kept coming – Luai weaving his way through to the line for his second, before Trent Merrin kept the ball alive for Dallin Watene-Zelezniak to send Corey Harawira-Naera over on the edge.

The Warriors crossed five minutes before full-time to get on the board through Ken Maumalo, but the four-pointer meant little as the Panthers got back on track after last week's loss to Manly.

A win would have put the Warriors back in the top-four but they will now drop from fifth to seventh after the heavy loss.

News & Notes: The Panthers have won nine of their last 11 games against the Warriors.... the Warriors have not won at Penrith since 2012... and they are back on the road next week playing Brisbane at Suncorp Stadium on Sunday, while Penrith enjoys their third consecutive game at home hosting Cronulla... Penrith fielded the most inexperienced side of the season against the Warriors with an average age of 23 ... Crowd: 10,255. 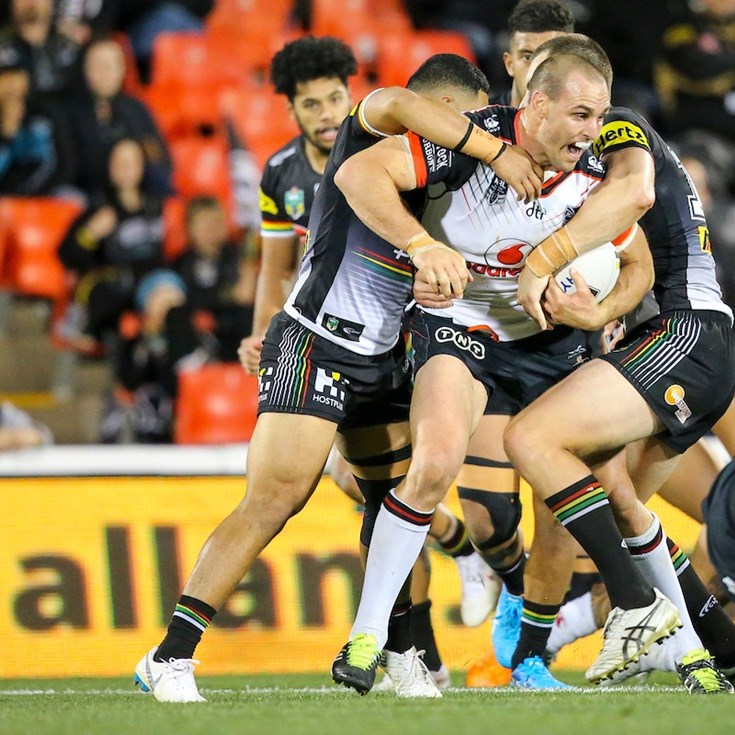 Line-up as selected to face Panthers

Away record on the line again tonight

Several changes made for Penrith encounter