The Warriors had several players involved in last weekend's international clashes and coach Stephen Kearney is hoping they're all available for this important meeting with the Sharks.

Fortunately Kearney doesn't have to worry about captain Roger Tuivasa-Sheck and classy halfback Shaun Johnson, both of whom didn't play for the Kiwis in the Denver Test against England.

Johnson and RTS should be extra keen to play after a week's rest, with the fourth-placed Warriors seeking their 11th win from 15 games. Oddly enough the Warriors have been outstanding away from home (6-1), yet have been hot and cold (4-3) at Mt Smart Stadium, the venue for this round 16 clash.

Cronulla (9-6) are under pressure to get back on track after two losses in their past three games. Pressing for a top four spot a few weeks ago, the Sharks have slipped to seventh and need to get back to the form that fuelled a six-game winning streak in the first half of the season.

Key match-up: While the battle of the opposing halves duos will be crucial, it's in the forwards where the game could be won and lost. The Warriors have the size and strength to stand toe to toe with any pack, but on Friday they're up against one of the NRL's smartest and hardest-working packs and anything less than a wholehearted 80-minute effort by the forwards could be costly.

For the Warriors to win: Have a number of players either missing due to or backing up from international duty and need the well-rested Johnson, Tuivasa-Sheck, Blake Green and Tohu Harris to lead by example with loads of energy and enthusiasm. The Warriors have been great at sticking to their own game for most of the season and need to avoid playing Cronulla-style footy.

For the Sharks to win: After a few weeks of ordinary performances the Sharks have to crank it back up a notch or two as they build toward the finals. They need to get some urgency back into their game, particularly with the Raiders and Wests Tigers looking for an opportunity if any teams currently in the top eight get the jitters over the final 10 rounds of the season. Matt Moylan needs to bring his A-game.

Warriors Stat Attack: The Warriors will have to pick up their defensive effort for their home game on Friday, after conceding at least 30 points in their past two matches at Mt Smart Stadium.

Sharks Stat Attack: Cronulla have the upper hand coming into this match, having won eight of their past 10 games against the Warriors.

And another thing: They are separated by three places on the Telstra Premiership ladder but it's a much closer fight in terms of points for and against for the Warriors and Sharks. Fourth-placed New Zealand have scored 289 points and conceded 264 for a differential of 25, while Cronulla have racked up 294 and given up 267 for a differential of 27. It might only be round 16 but this is a huge game for both teams, especially the Sharks.

In a raft of late changes an hour before kick-off, Kiwis Test pair Peta Hiku and Issac Luke will start and Anthony Gelling moves from centre to the wing with David Fusitua dropping out of the team. Fusitua, Sam Cook and Sam Lisone were the three players dropped from the squad. With Luke back in the starting 13, Karl Lawton drops back to the bench. Simon Mannering starts at lock for the suspended Adam Blair. Sam Cook and Jazz Tevaga have been called up to the bench. Blake Ayshford, Albert Vete and Maumalo were dropped from the bench 24 hours out from kick-off.

The Sharks will be 1-17 with 18 Aaron Gray, 19 Avagalu Seumanufagai the last two players to drop off the bench an hour before kick-off. New recruit Aaron Woods is straight into the team on the bench replacing Jack Williams (pec). Kurt Capewell and Scott Sorensen are in as the new second row with Luke Lewis (calf) and Wade Graham (cheek) both injured. Sosaia Feki, Braden Uele, Kurt Dillon and Kyle Flanagan were dropped from the bench 24 hours out from kick-off.

Steve Turner's prediction: Both teams have won three of their past five matches, but the Warriors will benefit from Shaun Johnson and Roger Tuivasa-Sheck missing the Denver Test and this is the time of year when they need to be making a statement. The Sharks love a grind and an arm wrestle and will turn to their forwards to lead the way on Friday night. It will be a big test for Cronulla, but they can win in a close one. Tip: Sharks by 4 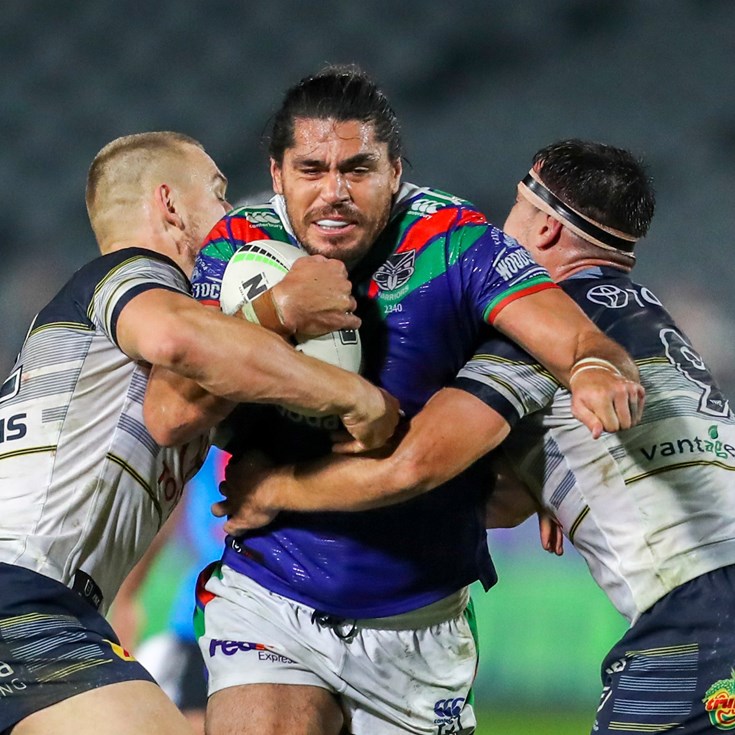