Up at No.1 for the second time this year. The Warriors were outstanding and really bounced back after a disappointing performance against Brisbane. Mason Lino coming in for Shaun Johnson was very impressive again in the way he controlled the ship and I wouldn't be surprised if he gets a contract or starting spot with an Australian-based team very soon. Blake Green continues to be the senior, cool head and Issac Luke is in career-best form. He's wound back the clock to 2014. It's so good to watch when these Warriors get the right balance between running hard and passing and playing Globetrotter footy.

I saw enough to believe that they're going to be in and around that top four spot. They had to lose sometime - no-one goes undefeated. They competed hard against the Warriors but I wonder if they had an eye on the Anzac Day clash. After being in that myself, I know that you do circle that game and look forward to it. You'd think that no Shaun Johnson for the Warriors would work in the Dragons' favour, but they missed an opportunity. The Warriors really wanted that game.

Absolutely amazing against Brisbane - one of the games of the year if not the game. Billy Slater and their outside backs are just so devastating when they get the ball and can just about do anything. We've seen Will Chambers kick for a try, we've seen Suliasi Vunivalu pass the ball 30 metres to his other winger, Curtis Scott is getting the job done. These guys have lifted the last couple of weeks and it's allowed Ryley Jacks to go in and do his job pretty much unnoticed. They are playing amazing football and I wonder if this kick-starts their season in terms of consistency and the standards they set for themselves.

A big drop from top spot for the Tigers. They started slowly away from home in Tamworth and if they're going to be a championship contender, even when you have those games when you're not quite on, you have to find a way to win. It's a different atmosphere in the bush, probably a lot quieter and different surroundings, but when you jump out to an 18-10 lead the best teams find a way to win those games, even when they're not quite on. I thought at the back end of that game they really tightened up and it's something we haven't seen from them. First week being favourites and maybe they didn't handle that. Ivan Cleary talks about hype versus expectation and this week it'll be two weeks in a row that they'll be favourites, so they need to bounce back.

Any time you can score 40 points it brings happiness and excitement to the team, and they are one of the hottest teams in the competition. They're playing off the cuff, they're playing what's in front of them. They don't have set plays and they just go out there and look for opportunities. Cody Walker, Greg Inglis and all these guys are leading from the front and it's allowing Damien Cook to get all the wraps, and he's fitting into that system well. I love watching the Rabbitohs play.

The Panthers drop down from three. They tried hard against the Sharks but there was some really average attacking sets that they had. They had a lot of the ball in the first half and couldn't capitalise on it, and they got ground in and drawn into a Sharks down and gritty type of game. They lost in similar fashion earlier in the season to the Bulldogs. It was another slow start from the Panthers but they'll be okay when they get their full team back from injury.

Any time you keep a team to nil is impressive in today's game and Trent Robinson would be very happy with their defence. But there are still massive question marks over their attack and how they involve James Tedesco as one of their main weapons.

A great win against the Tigers. They probably should be higher up but unfortunately the teams above them have shown a little bit more in terms of consistency. It was a gutsy win on the road to come back and steal it at the last minute, but you can't put them too high because you'd have to think without Mitchell Pearce they are going to drop in the next couple of weeks.

I saw them first-hand against Penrith and they looked switched on from the warm-up. They had that real backs against the wall mentality that Shane Flanagan loves, a classic Sunday afternoon special on their home ground. Anyone in the game knows that's a very tough place to play. Great to see that their big-name players stood up - Matt Moylan, Josh Dugan and Andrew Fifita were outstanding.

No change in the order for the Raiders. They let in 40 points and probably deserve to be lower in the Power Rankings but I'm giving them one more chance to prove themselves this week. They've got a tough clash with the Cowboys and both teams' seasons are on the line. They were pretty good in the previous couple of weeks so I'll stick with them at 10 for now.

They competed hard and I actually thought they were a big chance of knocking off Melbourne. Anthony Milford to halfback has certainly helped the Broncos and over the last few weeks he's been among their best players. His imagination and off-the-cuff football brain is one of the best in the game. He really is carrying that playmaking load for Brisbane and it's what we wanted and expected him to do.

I saw some signs late in that first half that they are going to return to form but there was a lot of errors and inconsistency, and there's some players out there lacking confidence within their system. The Cowboys did what they had to do but they weren't impressive by any means.

The Titans were pretty bad with their discipline in terms of holding the ball and being able to build pressure against the Cowboys, who were playing for their season. They lacked imagination and weren't able to get into that grind, and their discipline with penalties was atrocious.

A great win over Manly and they played with a lot of energy. I think their season is pretty much gone but they came out and put in a performance to be proud of. The challenge now is to back it up this week against the Tigers.

A bit of a surprise that they drop down to 15, but I just thought they had enough ball to win that game and I need to some some more excitement from them. It's hard to get a read on them in terms of how they want to attack. They had a great win over the Cowboys and come back home and have all that ball and couldn't score. The Roosters' defence was good but there was a chance there to try and mix up their attack.

Just diabolical. They didn't look interested. They really struggled with the things going on outside the group  that they couldn't control in terms of media and attention surrounding the club, and the troubling signs for Manly was another poor performance away from home. 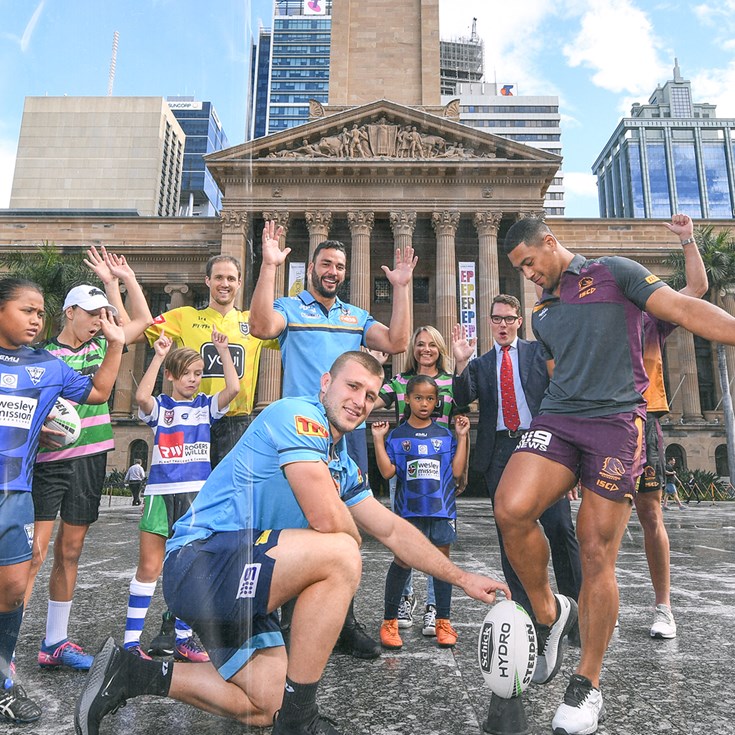