A second-half blitz has seen the Warriors smash Blacktown Workers 34-4 at Mt Smart Stadium, a major turnaround from last weekend's 32-0 blanking by Wests.

It’s been a week of atrocious weather up and down New Zealand this week, however both sides were given a little respite as the skies cleared over Auckland for the afternoon. The home side was back on Mt Smart for only the second time this season, enabling coach John Teina to field a strong side that included Albert Vete, Charnze Nicoll-Klokstad and Ligi Sao.

While Blacktown were missing a few players, due to the Sea Eagles’ NRL match being on the other side of the Tasman, there were a couple of names familiar to local fans. Former Warrior Lewis Brown and Toafofoa Sipley returned to the ground they used to call home, and looked to rectify the recent two-loss slide Blacktown have been on.

Even though the sun broke through the clouds as the game kicked off, the sudden change in conditions couldn’t stop a handling error off the first hit-up by Isaiah Papali’i. Blacktown then handed the ball straight back to the Warriors with a knock-on of their own almost immediately off the resulting scrum.

After play settled down, Blacktown had the early ascendency. Winger Jade Anderson opened the scoring after a perfect grubber kick by Joey Lussick, which was touched down just inside the left-hand corner post.

Tensions flared after 15 minutes, when a run by Lewis Soosemea ended up with both sides squaring off metres from the Blacktown goal line. The dust-up resulted in Warriors second rower Matiu Love-Henry being put on report.

Sao went inches within leveling the score in the 20th minute, however some staunch goal-line defence held him up. Centre Cole Waaka benefitted soon after from a bullet pass by Chanel Harris-Tevita to cross in the left-hand corner.

Blacktown found themselves offside from the resulting kick-off, and from there the Warriors were able to march straight back into enemy territory. This time it was the other winger, Nicoll-Klokstad, to collect another beautiful pass from Hayze Perham and walk over in the corner. Mason Lino added the extras one metre in from touch.

Both sides ground out the first half between the two 20-metre lines, for a 10-4 Warriors lead at half-time.

The second half begun almost exactly as the first had; with a handling error by Blacktown gifting the Warriors an early attacking opportunity. A stunning bit of defence by Blacktown fullback Honeti Tuha that stripped the ball off a flying Karl Lawton kept the Warriors out not long after, and the game looked to settled back down into the arm wrestle it had been previously. However, an intercept by Warriors reserve forward Patrick Sipley set up good field position for Perham to step and bust his way over 10 metres in from touch. Lino converted to give the Warriors a handy lead in the 52nd minute.

Shortly after, another try came in spectacular fashion when Albert Vete finished off a 60-metre movement sparked by another Lawton break up the middle. The big man slammed the ball down eight metres in from touch, however Lino had found his range and slotted the kick for a 22-4 lead.

By now the Warriors were humming and a Blacktown knock on gifted them another try to Love-Henry. He brushed past some tired Blacktown defence close to the line and it seemed that the writing was definitely on the wall for the visitors.

Lino then put the icing on a commanding individual performance three minutes from the hooter, dancing his way through to the line for a try that he again converted.

The win will give the Warriors a lot of confidence when they welcome the Dragons to Mt Smart next weekend. However it’s now Blacktown’s third loss on the trot,  and they’ll be desperate to get their season back on track against the Wyong Roos.

The @NZWarriors bounce back, while it's three consecutive defeats for the Blacktown Workers @SeaEagles. 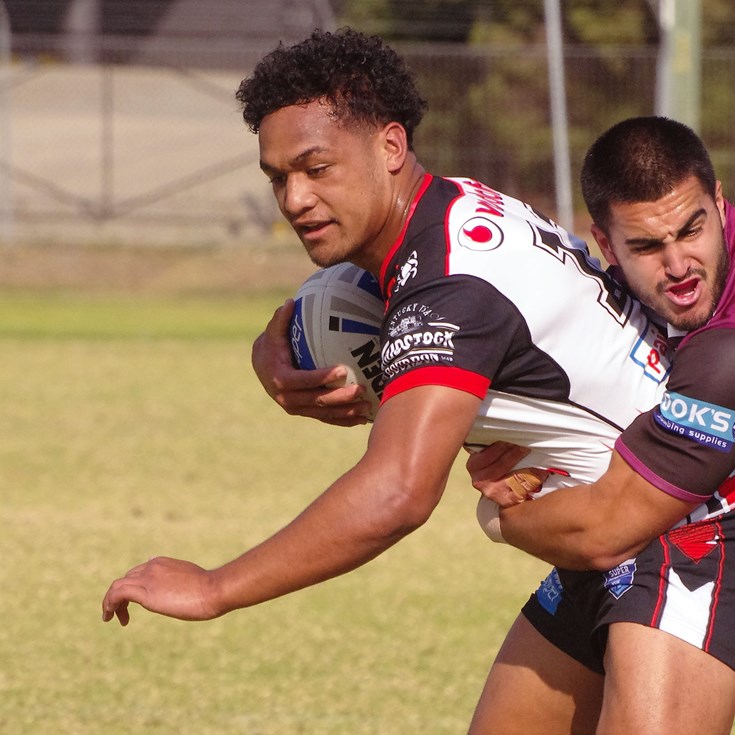