The New Zealand Warriors have defeated the Gold Coast Titans 20-8 to open season 2018 with back-to-back wins.

Clearly missing the services of halfback Ashley Taylor (hamstring), the Titans had no answer for the attacking game of the Warriors who ran in four tries to one to record their second win of the season – and sixth straight over the Queensland outfit.

The Titans opened the day's scoring through a penalty kick from Michael Gordon after a poor end to the opening set of the match from Shaun Johnson saw the Warriors give away a penalty.

Up 2-0 after just two minutes the Warriors gifted field position back to the Titans through an error in their own half.

The visitors looked to have again made them pay, five-eighth Kane Elgey slicing through to score under the posts – however he was denied by the bunker for an obstruction.

That seemed to spark the home side into action and the offloads began to flow from the likes of Adam Blair and Ligi Sao, in particular.

Around the 30-minute mark Roger Tuivasa-Sheck was able to slip in between tackles and break into the open field from his own end, tackled just 20 metres out from the line.

The Warriors spun it wide and looked to have David Fusitu'a over in the corner but for a try-saving tackle from Gordon.

However the winger couldn't be denied just moments later when Tohu Harris put Peta Hiku clear, with the centre finding Fusitua unmarked for the first try of the match. Johnson converted and the Warriors took a 6-2 lead after 20 minutes of play.

Three minutes later and the home side were in again, this time the all-star spine of Issac Luke, Shaun Johnson and Blake Green combining to put Tuivasa-Sheck over under the uprights.

Down 12-2 the Titans needed a spark but clearly missing the kicking game of Taylor, with poor ends to their sets meaning the visitors were playing most of the opening 40 from inside their own end.

Stand-in halfback Bryce Cartwright was able to force a repeat set two minutes before the break but a forward pass from Elgey again let the Warriors off the hook and the home side went into the sheds up by 10.

Both sides traded errors to open the second half, the first genuine attacking raid coming off the back of a penalty to the Titans.

However former Warrior Konrad Hurrell was held up over the line and another poor end to the set from Elgey saw his kick go over the dead-ball line and gift the Warriors a seven-tackle set.

After a largely uneventful opening 10 minutes, another Blair offload saw Johnson brake away and find Sam Lisone who was dragged down just 10 metres short of the line.

The Titans gave away a penalty and the Warriors decided to turn down the two points but were unable to get over the line – Johnson's kick finding the touch-in-goal line.

In front of more than 14,000 at Mt Smart, the Warriors' attacking flair was on full display as Johnson and Tuivasa-Sheck proved a handful for the Gold Coast edge defence throughout.

With 20 minutes remaining Elgey was able to thread the needle and force a repeat set for his side. The Titans pressed on the line and eventually found a way through out wide when Phillip Sami crossed in the left hand corner, only to be denied again by the bunker for yet another obstruction.

The Warriors on the other hand had no such problems.

Minutes after Sami was denied at one end, Solomone Kata crossed at the other on the end of a well worked sweep play which saw Tuivasa-Sheck give the final pass. Johnson was unable to convert from out wide as the Warriors extended their lead to 16-2 with 15 to play.

Off the back of a repeat set, the home side kept mounting pressure.

With just seven minutes remaining Johnson lofted a high kick out towards the wing of Fusitu'a who flew through the air and came down with ball to score the Warriors fourth try of the day.

The conversion was again unsuccessful from Johnson.

It took the Titans 77 minutes but they eventually got across the chalk through winger Anthony Don, who pounced on a Hurrell grubber kick to score.

Gordon converted but it counted for little as the Warriors claimed a 12-point victory.

They had to do so without the services of young back-rower Isaiah Papali'i who limped off after just eight minutes with a lower leg injury. 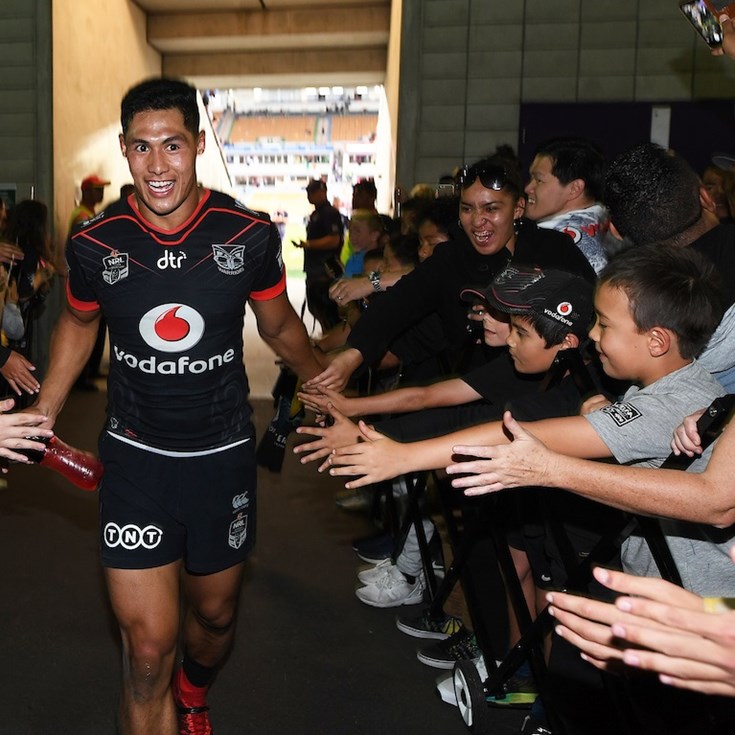 Disappointing day out for Vodafone Warriors in ISP

Round one winners face off on St Patrick's Day