A season-best performance netted the Vodafone Junior Warriors a 45-10 over Brisbane in Townsville tonight to leave them within one win of reaching the NYC grand final yet again.

If they beat the Panthers, they'll make the grand final for fifth time in the competition's eight seasons in existence.

They dominated all aspects of the encounter in Townsville with golden-haired prop Paul Tuli a stand-out as he carted the ball forward 18 times, made 216 metres - both game-high numbers - added 24 tackles and also scored the first try of his NYC career.

The Vodafone Junior Warriors impressed with their early sets in possession, gaining some good field position but they wanted for execution, missing out on two chances to score first.

Having failed to make the most of the openings the Vodafone Junior Warriors had to endure a stint absorbing some Brisbane pressure; they handled it well, enduring repeat sets on defence and then heading well out of their end on the back of a defensive penalty.

They put together their best set of the contest to that point, shifting the slickly and then coming to their right where fullback Brad Abbey poked through a perfectly-weighted grubber for wing Paul Ulberg to race onto for a 10th-minute try.

The 4-0 lead was immediately under threat when the Vodafone Junior Warriors knocked on in the set straight after the restart. They recovered and then busted clear through Ulberg down the right edge only to see the final transfer infield being knocked on.

The Broncos showed their desperation on defence to stop that Vodafone Junior Warriors raid and then set themselves up to strike back with loose forward Jai Arrow driving over from close range. With Jack Tuttle converting the Broncos were 6-4 ahead after 21 minutes.

The Vodafone Junior Warriors weren’t at all flustered. They forced a Brisbane error soon after the restart and put the heat right on the Broncos in the 25th minute, standoff Ata Hingano picking up Semisi Tyrell on a tough line. He bulldozed between two defenders, took them over the line with him and got the ball down well with Hingano converting brilliantly for a 10-6 lead.

Five minutes later they had a repeat set from a penalty and Hingano again played provider. With Tuli clearing from dummy half, Hingano went to the line, held his pass up nicely and put impressive loose forward Jazz Tevaga through a gaping hole for his sixth try of the year. Hingano’s conversion attempt wasn’t one of his best leaving the Vodafone Junior Warriors 14-6 ahead.

There was a setback, too, with prop and player of the year Bunty Afoa striking more trouble with the knee injury which had sidelined him for the previous two games. He’d put in a fantastic shift of more than 30 minutes and his absence threatened to be an issue for the Vodafone Junior Warriors.

It wasn’t a problem initially. Quite the reverse. Tuli kept thundering forward and the Vodafone Junior Warriors wound up the intensity by forcing another goal-line dropout.

From the resulting set they came at the Broncos again, first through Tuli, then replacement front rower Mattais Heimuli had a carry before halfback Erin Clark, switched to hooker for the injured Casey Lafaele, had a strong shot at the line out of dummy half. Next up Kauri Aupouri – coming into the halves – flicked out a wide pass to Hingano, he linked up with Abbey and with three players outside him a try was a certainty. Tyrell was the beneficiary, steaming onto the ball and taking a tough line again en route to his second try. Hingano nailed the conversion for a 20-6 halftime lead.

That lead was extended to 26-6 just six minutes into the second half on the back of another powerful set in possession. From a scrum on their 40-metre line they surged downfield, won a penalty and then from the first tackle Clark exploded out of dummy half from 15 metres out to score his eighth try of the season.

But for desperate scrambling defence from the Broncos they were set to back it up immediately afterwards with some razzle dazzle football only for the attack to falter as the ball was jolted loose.

Just as impressive as the Vodafone Junior Warriors' attack was their defence when they turned up in numbers to stop what seemed certain to be a Brisbane try in the 52nd minute.

When they lost possession through a play the ball error soon after, they couldn't muster defensive steel again in the 56th minute as the Broncos organised a try for centre Jordan Drew. It wasn't converted leaving the Vodafone Junior Warriors 26-10 ahead going into the final quarter.

However, any anxiety about Brisbane arranging a comeback was immediately allayed in the 61st minute when the Vodafone Junior Warriors were all composure coming out of their half.

Again they used up their left edge, this time on the fourth tackle with Hingano the instigator as he had been throughout the match. He was all poise going to the line, popping a sweet ball out the back and it was catch and pass for Abbey to send Tyrell away for his third try (emulating the hat-trick he scored against the Broncos in the only other meeting between the two sides this season in Auckland in March). With Hingano's conversion the lead was out to a healthy 32-10 with 18 minutes to play.

They weren't done with.

Tuli powered over off Tyler Mohi's sweet service out of dummy half for his first NYC career try in his 25th appearance in the 66th minute and four minutes later Abbey raced through to snatch a Hingano bomb expertly. With two Hingano conversions the Vodafone Junior Warriors had cleared out 44-10 in what was their best performance of the year.

They went searching for 50 points but when options ran out in the final seconds Abbey decided to take a field goal shot instead. It was on target to complete a 35-point rout, a brilliant effort on the toughest road trip in the game. 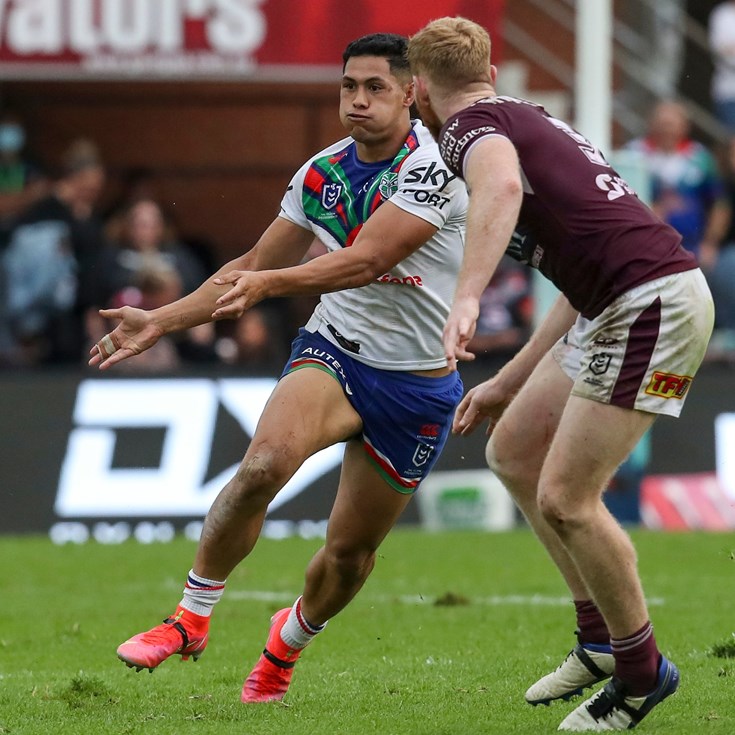